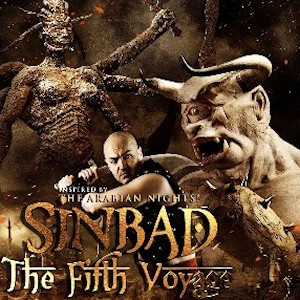 Sinbad: The Fifth Voyage Ultimate Director’s Cut, to give it its full title, hooked me in from the first words. Mind you, they were spoken by Sir Patrick Stewart and I would do anything asked of me by that voice! I’m old and straight but if he asked, I’d think about it. Fortunately I know he’s straight too, but if his best friend Sir Ian McKellen asked, well, that might be a different ethical dilemma.

Anyway, back to Sinbad: The Fifth Voyage UDC… one of the things I spotted during the opening credits was that it was filmed in “Super Animation – The Original Visual Wonder Of The Screen,” which immediately took me back to the early ’60s and a small black and white screen in a large faux walnut cabinet. I was addicted to everything that Gerry Anderson produced using his Supermarionation technique; Supercar, Fireball XL5, Stingray… I loved them all.

But the thing that really ties this into my early years’ viewing was a film that, in equal parts, fascinated, frightened, and enthralled me, was 1963’s Jason And The Argonauts. To be honest, Talos still gives me the willies. But it’s the extended fight between three actors and seven living skeletons, the hydra, and the harpies, that were considered as the masterwork of the one and only Ray Harryhausen.


So when the relevant scenes arrived, I was looking forward to them and — to be honest, I wasn’t disappointed! It is so easy in this day and age to forget the thrill that seeing films like One Million Years B.C., Clash Of The Titans, and the aforementioned Jason And The Argonauts gave to a young boy back then.

Children nowadays are used to seeing creatures, real and mythological, drawn with pixel sharp reality. Motion capture makes sure that movements are smooth and lifelike, both in the whole body and the face. As I’ve said before, I don’t consider there to be a 1994 animated version of The Lion King and a 2019 live action version; I think that there were two animated versions… one traditional and another digital.

Sinbad: The Fifth Voyage UDC took me right back to those days. The actors have to get their eye lines right to really sell the effect, and the colour and lighting has to be balanced so that the two halves match. These were mostly spot on but just occasionally off, which, to my mind, just added to the charm of the whole thing.

I’ll admit I went through and looked at the reviews. As the original version came out in 2014 there were plenty of them, and a lot were deeply disparaging — mainly about the special effects. I think that was another case of new eyes not appreciating old technology just for the sheer joy of it. It’s a bit like the Kindle vs ‘real’ book, or vinyl vs digital effect.

A Worthwhile Remake with a Swashbuckling Sinbad

Special effects aside, the rest of the cast were good. Shahin Sean Solimon was a perfect Sinbad; he really looked the part. The rest of the cast were similarly suited to their roles and, in the main, were capable actors. Admittedly there were some rough spots, but nowhere near as many as there have been in other independent films. Similarly, there were some slight misses with the storyline, which more rigorous storyboarding could have sorted out.

So, in short, if you really, really insist on Super HD pixel-perfect images for your fantasy sequences then you will be disappointed but if, like me, you remember and have a soft spot for the early days of special effects, then you’ll find this Sinbad movie great fun.