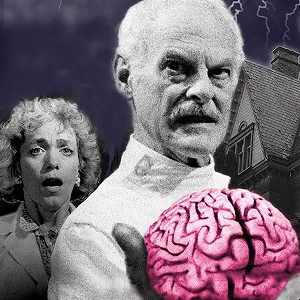 Housesitter: The Night They Saved Siegfried’s Brain started off intriguing me before I even started watching it. With a screener link usually comes some supporting info, stills, posters, blurb, etc. and it sounded interesting. Of course it does, I hear you say, that’s why they send it. But hear me out…

Housesitter: The Night They Saved Siegfried’s Brain was filmed in 1987 but only finished within the last twelve months. It was written by and features Richard Gasparian. (Who? Well if you are an end credits hawk and watch a lot of animation you may have seen the name; Extreme Ghostbusters, Jumanji, Men In Black, Dilbert, King of the Hill, and, most famously, The Simpsons. He is, apparently, a timing director. No… me neither.) Then it goes on to say that it sat on a shelf for thirty two years but, recently, Skywalker Sound took on the sound and Paramount Pictures colour department did the final picture and so it is now complete.

I did wonder for a bit if it was actually filmed in the ‘80s or it was just some sort of back story to whip up interest; the clothes looked right as did the hair so I think that it was shot in 1987. Maybe the IMDb Goofs spotters might come back and say that the Budweiser tins in the party scene weren’t used until 1989 or something like that but it looked genuine to me.


So then we come to the film itself… to be honest it headed off in one direction but very quickly got lost. I found myself thinking that this was a send up of some of the ’80s shlock horror films like Chopping Mall or Ghoulies but then I remembered that this is actually one of them albeit not actually a good one. Then there are the allusions to ‘50s sci-fi films like Plan 9 From Outer Space or The Wild Women Of Wongo. I don’t know if it’s meant to tie in with the ‘50s sci-fi vs ‘80s horror themes but the lab scenes were in black and white while the party scenes were in colour.

The acting was pretty hit and miss but, having said that, nearly half the cast in the IMDb listing only had one entry… Housesitter: The Night They Saved Siegfried’s Brain. One wonders if they might have had more calls if the film had been released thirty years ago.

I did keep thinking that I was going to like this more than I actually did. Even three quarters of the way through I still had hopes that it’d turn around but, sadly, it didn’t really.