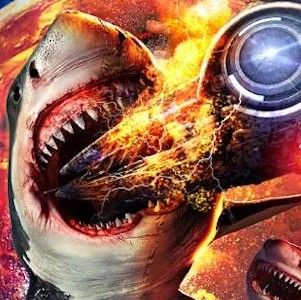 Some films you know what you are going to get before you walk in. There may have been a buzz about them. There may have been a massive publicity campaign. It could just be the title. Shark Encounters of the Third Kind falls into the last category; not since Snakes On A Plane has the premise of a film been more succinctly summed up.

And there’s another reason why I thought this would live up to the smile the title put on my face… when “Polonia Bros. Entertainment” flashed up on the screen.  I’ll admit to being a newcomer to the Poloniaverse, but it hasn’t taken me long to settle into the strange new world that their particular branch of budget filmmaking has to offer.


A Modern Form Of Repertory

My guess is Mark Polonia makes films because, quite simply, he loves making films. Polonia Bros. Entertainment (PBE) was formed by twins Mark and John in the late ‘80s; their first commercial release being Splatter Farm, the sequel to which, Return To Splatter Farm, was mentioned previously. PBE has been behind over forty films since then. John died suddenly in 2008, and Mark has been dedicated to his craft since then, turning out up to four films a year.

The secret to their longevity is twofold. The first is the boundless energy and enthusiasm they heap onto any bandwagon. They’ve made films on every topic, from aliens to zombies via sharks, robots, apes, and Amityville.

The second is the repertory-like team that he works with. Ken Van Sant, Kathryn Sue Young, Jeff Kirkendall, and the marvellously named Titus Himmelberger are just some of the regular performers. It looks like they all have tremendous fun. I guess they do, because they keep coming back for more and the money can’t be great; Shark Encounters of the Third Kind cost about $30,000… people spend more on a car!

So What Genres Do We Have Here?

Well, sharks and aliens obviously! The aliens arrive and, somehow, manage to boost the intelligence of the sharks, who are conveniently kept fed by swarms of divers (all after the treasure in a sunken Nazi submarine). So, nasty aliens and killer sharks. The rest of the film is fairly obvious and can be summed up spoiler free… the good side has to defeat the bad side.

And is it worth sticking around to find out? I think so but, in all honesty, I have become intoxicated by the charm and naïveté of the PBE world. Is it perfect? No! Not by a long way. The sharks look like they’ve been recycled from other films. There’re loads of stock footage slotted in, the acting is a bit hit and miss, and the effects are definitely dodgy — but I don’t care! Willing suspension of disbelief doesn’t just have to be applied to convoluted plot points; I think it can be applied to overlooking times when a filmmaker has to cut corners, simply because he doesn’t have access to the mega budgets of a Disney or an MCU.

Just Be Careful Around The Hole, Plot Hole That Is

There is one enormous error though. The diving is a central plot point. They are diving to find stolen Nazi gold in a sunken submarine. The submarine was heading from Germany, presumably, and heading to South America. So how the hell did it manage to get sunk off the coast of California? I’ve heard of taking the pretty route, but come on! A simple move of location to somewhere on the east coast would have sorted that.

But we do have the delightful Jennie Russo as Dr. Kay Radtke. She is the daughter of a man who set up an alien abductee’s support group and manages to keep her clothes on all the way through. For some reason, she made me think of Scully in The X-Files. Her real world partner and PBE regular, Jeff Kirkendall, and the man himself, Mark Polonia, are the masterminds behind the treasure recovery effort (or the guys who keep feeding the sharks with unsuspecting accomplices, depending on your point of view).

Another real world partnership is Titus and Natalie Himmelberger as the harbour patrol and mad cat lady, respectively.

All the acting is performed in a similar way to a pub urinal near closing time — with more enthusiasm than accuracy —  but that just adds to the charm.

Think back to the late, great Edward D Wood Jr and his seminal masterpiece Plan 9 From Outer Space…  Shark Encounters of the Third Kind belongs in a similar category and will, I think, develop a similar cult following.