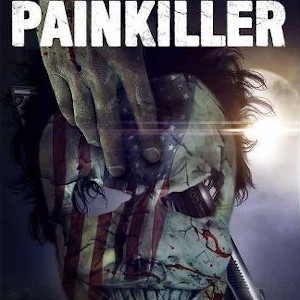 Cards on the table time… there’s a lot about Painkiller that I have difficulty in relating to. Not that I can’t believe it, I’ve heard enough of the US medical system to know it’s, well, quite different to every other Western country. There are some situations which could happen over here in the UK, but there are way more that wouldn’t.


Painkiller is about a father who has lost his daughter to opioid addiction. This is down to painkillers being too easily available or over prescribed, and so he decides to take a direct approach to the problem.

And this is an actual problem in the USA. The American Society of Addiction Medicine (ASAM) states that, in 2015, there were 20,101 deaths due to prescription medicine overdoses, as opposed to 12,990 for heroin; in short, legal, prescribed drugs are killing nearly twice as many people as illegal drugs.

What’s It All About?

Painkiller sees bereaved father Bill Johnson (Bill Oberst Jr) coming to terms with the loss of his daughter. He starts off as one of those one man radio show things which, apparently, are a thing in the USA.

Do people actually just start broadcasting when they feel the need to vent, or do they keep to a schedule? More intriguingly, do people just listen to dead air until their chap starts talking and then they phone in?

Anyway, Bill spends most of his time blaming the high death rate on the drug companies for pushing sales, and doctors for overprescribing to get bonuses.

To start making amends, he takes it upon himself to get a mask and a big gun and start shooting people along the supply chain, both legal and illegal.

I’m not going to pick on the shooting thing.

It’s not a UK thing, but I know it happens in the USA. The big difference between here and there is the point of contact for the prescription. Apparently, in the USA, drug companies will advertise to the general public, who will then go to their doctor, say they have the symptoms and need this drug, hand over their money, and get a script.

Over here it’s totally different. I don’t know what the latest drug is for any particular condition and, if I have a problem, I go to my GP and tell him what’s wrong with me. He’ll order some tests and then prescribe what he thinks you need. Also, a prescription usually just gives the generic name; it’ll say something like “Tramadol 50mg, prn dol.urg Max 2qds” and won’t mention a brand name like Marol, Zydol, or Brimisol, so the dispenser will give whatever they’ve got the most of.

It means it’s pointless for the drug company to pump bazillions of pounds into promoting their stuff.

So the main thrust of the film is about the protagonist justifying going around shooting people who are, after all, mainly not doing anything illegal — which I can understand without actually relating to. It did start to get a bit relentless though. I understand they had a message to get across but, after a while I did feel like it was being hammered into me with something very blunt and heavy.

Unfortunately, though the worst thing for me was the lead actor, Bill Oberst Jr.

Don’t get me wrong; he was good as the character; suitably intense and driven, and carried the part, and most people wouldn’t have a problem with him. My problem is that he just reminded me of Barry Chuckle. That’s something that won’t cross the Atlantic!