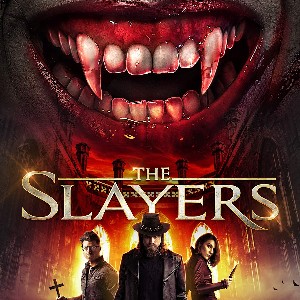 The Slayers could have been a lot better than it actually was. There were some good ideas which, I thought, promised a lot but never got fully developed.  We start off in a plain room filled with people all dressed in white gowns. At first glance it could be a therapy scene from One Flew Over The Cuckoo’s Nest, except for the general air of jollity and everyone eating biscuits and drinking juice.

Then a messianic young man calls the group to order and starts preaching about how they are gathered for the final time, as an unspecified god is going to destroy the planet in a fortnight’s time, courtesy of a comet.

In some kind of queue jumping exercise, the group is going to commit suicide rather than wait for the comet on this filthy, sin soaked globe.

All apart from Job and Nigel (Matthew Sandland and Darren McAree) who decide, instead, to go off and do something they’ve never done before… go on a holiday.  They get a loan, buy a  motorhome, and set off for Blackpool, the Lake District, and Scotland.

So far, so so-so. I mean the whole “bucket list” theme has been done many times before, but I’m not aware of one when the whole world is supposed to die — but doesn’t know it.

I mean the whole “bucket list” theme has been done many times before, but I’m not aware of one when the whole world is supposed to die but only the protagonists know it. There could have been all manner of shenanigans along the “what’ve we got to lose” or taking advantage of the interminable “buy now, pay next year” offers to boost your lifestyle.  They do take out an unspecified loan, but then just go to Blackpool, the Lake District, and Scotland!

I mean, I come from the NorthWest and know the Lake District is truly gorgeous, but if I thought there was only a fortnight left to live I’d want to go somewhere way more exotic.

The justification for their decision seems to be something I found more than a touch disturbing. I may have missed something, but quite a few of the characters seem to have some form of disability. Now there are plenty of films that have characters with a disability, and they are played with sympathy, or by actors with those disabilities. These characters seem to be being played to try and raise laughs. They fail.

Is That All There Is To It?

This is when The Slayers changes direction. While aimlessly wandering around the Peak District, which seems to be standing in for the Lake District, they bump into another story arc and another group of people… The Slayers of the title and the slayees, a group of vampires.

Purists of vampire lore may want to leave around now, as there are a variety of nonsense plot points, including a reason why these vampires can wander around outside in day time, and something about methane-filled bags.

All in all it’s not a particularly satisfying or even cohesive story.

So, dodgy story, uneven acting, making fun of people with disabilities… was there anything to like?

There were a few jokes that actually landed and made me smile but, in a better structured film than The Slayers, there would probably have been enough momentum to make those generate laughs.

The scenery was a bit disappointing, and would have been better if they’d driven for another hour and actually filmed in the Lake District.

Oh, Anthony Miles as the cult leader, Brother Steve, was the acting high spot. Pity he didn’t make it past the opening credits.

This was a film watched out of duty rather than joy.