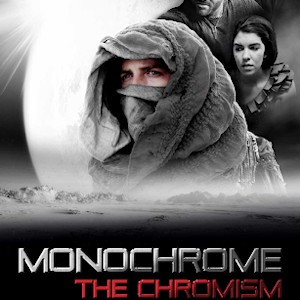 To be brutally frank Monochrome: The Chromism is a bit of a mess.

Incidentally, I have to refer to this film by its full name, Monochrome: The Chromism, as there’s a 2016 film called Monochrome which is a totally different story.

Anyway, Monochrome: The Chromism starts off with a chap driving cross country, walking through a battlefield, by a wrecked building, across a desert… and there’s pigeons and a party.


The chap says he is the first of the ‘hues’ and seems to have some rudimentary contact with someone else. For no apparent reason he gets into a situation that ends up with him being captured, and we cut to “One Year Earlier” and the story of how he became a hue is told.

A hue is a person who is “glowing” — which is shown by them being in colour against the black and white background and other characters. This is used to hammer home the message of how stupid any form of inequality is when you get down to it.

So it’s the same basic story that was told in Pleasantville, but done in a much more heavy-handed fashion.

There are garbled, half-told explanations about a war between England (not the UK, so that’s a bit odd) and the USA, and the use of biological weapons, without saying by whom. Neither of these storylines gets adequately resolved. The whole thing just leaves you feeling frustrated and confused. The end doesn’t land anywhere near the beginning or tie up any loose ends.

On the plus side, it was beautifully shot, and the colour effect of the hues was well done.

It’s just a pity about the acting, dialogue, story, and direction.