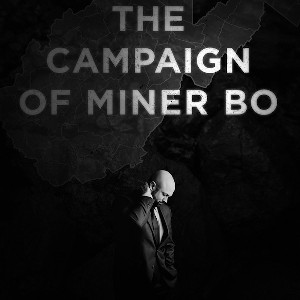 To be honest, I’m not sure if I’m the best person or the worst to be reviewing The Campaign Of Miner Bo. First off, I’m British and, secondly, I’m a socialist. My only knowledge of American politics is from watching and rewatching The West Wing and, as a card carrying member of the Labour Party, I’d really have my sympathies with the Democrats, and here I am watching and reviewing a film about a man who meets Hillary Clinton, disagrees with something he thought she said, and decides to run for the Senate.

The Campaign Of Miner Bo is about Bo Copley who used to be a miner in Williamson, West Virginia. During a televised debate prior to the 2016 election, Hillary said, and I paraphrase, that they (the Democratic Party) would be putting a lot of coal miners and coal companies out of business. At the time, the coal industry was a big part of the West Virginian economy. Some time afterwards, Ms Clinton came to Williamson to explain herself to the people she was claimed to be making redundant. One of the people in the meeting was Bo Copley and, shortly afterwards, he made the decision to run for Senate. The Campaign Of Miner Bo is the story of his efforts.

So far, so fairy story… at least that would be if this was a scripted film and not a documentary; if this story were written rather than just recorded then Bo Copley would have probably anded up as President! Incidentally, a word about spoilers, I feel that any real event, such as the results of the election, which can be looked up with a few clicks have already been ‘spoiled’ so if you want the ending to be a surprise then look away now!


Some of the events that took place are, from a British viewpoint, rather bizarre. For instance, I can’t understand a miner allying himself with the Republican Party. I still remember the miner’s strikes of the ‘70s, my grandfather was coal hewer in a South Wales deep mine, and I can no sooner imagine a miner joining a right wing party than I can fly.

Then there is religion. Britain is a mainly secular country. When asked what  religion they are, most British people would probably mumble ‘C of E’ but only ever enter a church for weddings, christenings, or funerals. A lot are passively, if not actively, agnostic or atheist and only a very few are Bible quoting, church going, self proclaiming Christians. This seems to be the reverse in the USA.

Another big difference is the American political system. The main reason Bo fails seems to be money. He is annoyed that he is put in with the ‘second tier’ candidates who are, effectively, written off by the mainstream media. They only get invited to half of the radio shows and often are left out altogether. Bo Copley has a good case and a good cause. At the time the ‘get real people rather than professional politicians’ ethos seemed to be gathering steam. He has popular support and comes across as an honest, regular guy but he doesn’t have any financial backing so he gets nowhere.

All in all this must have been a good documentary. In previous documentary reviews I’ve said that what makes a good documentary is when it makes a connection to the viewer; it can be on a subject you know, be set in a place you’ve lived, or be about people you’ve met. However, most of this review has been me saying that I don’t understand this, what’s that all about, or why’s that other thing happening. But… BUT… I was still gripped by the story, and I still had my hopes for the outcome. If I had the chance I’d happily sit and have a beer or a coffee and a chat with Bo Copley. I might have some questions for him but I’d trust him to give an honest answer.