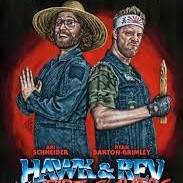 I’ll be honest. As soon as this started running I thought, “here we go… another low budget, low talent, low quality bit of nonsense,” but I was pleasantly surprised!

I’m sure that it is a low budget piece. The sets seem to be back alleys, back gardens, and public roads. The cast are all new faces. To me anyway; apologies if that’s down to my lack of exposure, as they’ve all racked up a fair few IMDb entries each.

Now, I’m not sure how old the characters are supposed to be, but they sound a lot younger than they are; the dialogue rings of late teens/early twenties, but the faces say thirties or forties. It could be down to me not being up to date with current colloquial dialogue on the West Coast.


So I was settling in to another “duty watch”… middle aged man, dressed and talking like a teenager, walks down an alley and meets an assailant. Cue loud music, screams, and sprays of fake blood. Roll opening titles.

But then the film proper starts and, while the budget didn’t get noticeably bigger (thank goodness there are drones available now for cheap God Shots!), the humour increased.

Hawk & Rev: Vampire Slayers is super fun, and worth streaming

To my eye, this was a nice self-referential skit on the comedy and horror films of the last century. There were shades of Bill & Ted, hints of Scream, even the odd bit of Scooby Doo! I did like the way that they didn’t take themselves too seriously; Hawk and Rev go to see someone on the pretext of getting their copy of From Dusk Till Down back. They describe it, and Hawk mentions about the director of it trying to act… Ryan Barton-Grimley plays Hawk and is also the writer/director!

Also there are some nice throwaway jokes during the end credits about the travails of making low budget, independent movies.

So in the end, I was pleasantly surprised by this venture, way more than I expected to be even during the run up to the opening credits.

I’d grade this as a B! Fun film. I hope it does well. We recommend streaming this one if you’re in the mood for light, comic, vampire slaying action.