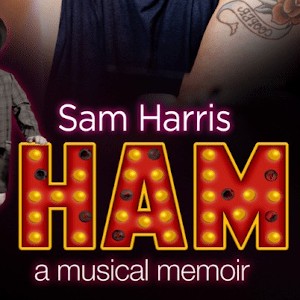 If you’re like me, you’ve missed live theater during the pandemic.  You watched Hamilton and you’re looking forward to Netflix’s adaptation of The Prom.  May I suggest a one-man show that may not be on your radar yet?  It’s called HAM: A Musical Memoir and it’s playing in virtual theaters now.  Starting January 7, it will stream exclusively on Broadway HD.  (Maybe it’s time to gift yourself a subscription.)

HAM: What it is

HAM is the musical autobiography of Star Search phenomenon Sam Harris, adapted from his memoir of the same name.  (I just added it to my Audible wish list.). From the opening monologue, it’s hard to resist Harris’s charm.  He’s funny and energetic.  He has a quick wit — mixed with sincerity — that reminds one of Robin Williams.  And like Williams, he can be unpredictable.  Whether he’s playing both sides of a conversation or climbing the scenery, you will be entranced.  (I’m laughing just looking back at my notes.)  Harris not only wrote the show, he acts, sings, and dances in it.

HAM: What it’s about

The show follows Harris from his youth, where he discovered he was different and that he loved to perform, to adulthood, where finally came to accept himself.  A gay man’s journey to acceptance may seem cliché, but Harris makes it feel fresh.  My girlfriend and I both teared up at a scene toward the end.

While HAM is essentially a one-man show, it also features Todd Schroeder.  He is Harris’s piano player and long-time collaborator.  Schroeder becomes part of the story, even playing a critic (perhaps Harris’s own inner critic) during one number.  The two play well off of each other.  Schroeder is the music director, arranger, and the composer of most of the music.  (Several classic show tunes are featured as well, including Harris’s stunning version of “Somewhere Over the Rainbow”.)

The set of HAM

I was impressed by the set.  I’m usually not a fan of screens.  (I feel bad for audiences who no longer get to see the majestic set from the original production and tour of Les Miserables.) However, the screens are used to great effect here.  They provide a quick way to change sets.  They suggest a location with just a few images.  My favorite was during a scene in a church, where the images of the pews and the sign behind the pulpit with the hymn numbers took me back to my own Southern Baptist childhood.

I’m tempted to spoil all the best lines and moments for you, but I want you to have the joy of discovery for yourself.  The show is hilarious.  But it’s also genuine and touching.  Harris strikes the perfect balance between the comedy and the drama.  He never lets the show go too long without a laugh.

My one complaint about the show is that it glosses over the relationship between Harris and his partner.  I want to know so much more about how they met and fell in love.  Maybe there will be a sequel?

Billy Porter (star of Broadway’s Kinky Boots and the TV show Pose) directed the original stage version of the show.  Ken Sawyer directed the L.A. version shown here.  The film was directed by Andrew Putschoegl.  (Check out his other projects Nerdgasm and Stephen Tobolowsky’s Birthday Party on Amazon Prime.  They are essentially one-man shows and well worth your time.)

Due to a few F-bombs and some serious thematic material, this movie is probably best for ages 13 and over.

I can’t recommend this movie enough.  I hope you’ll seek it out.