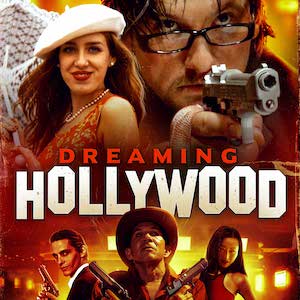 There have been a fair few meta films; ones which look at the process, politics and palaver of actually making a film. It is nowhere near as simple as just turning the camera away from the gorgeous, glamorous people who you see on the screen and filming what goes on behind it…not if you want people to watch it!


Hail, Caesar!, Mank, Get Shorty, The Disaster Artist, Ed Wood, Once Upon A Time In Hollywood, Saving Mr Banks, and Sunset Blvd. are just a a few that I’ve seen in recent years. Even from that short list it is easy to see that the talent involved must mean that it is a fertile area  to explore and exploit. I mean, if the likes of Tim Burton, the Coen Brothers, Quentin Tarantino, and Billy Wilder go there…

Everything You Do A Hundred Times Is Bound To Take Off

Dreaming Hollywood is the latest in this particular sub-genre. I’ll be honest and say that it slips in with those other titles quite easily. I’m not going to say that it copies from the others but there are similarities. Then again, if a film features stetsons and six shooters it is a western but that doesn’t mean it has copied High Noon.

Stylistically, there are similarities between Dreaming Hollywood and a variety of other productions. Watching it you are reminded of Quentin Tarantino, the Coen Brothers, and David Lynch. Interesting characterisations, witty conversations, and jaw dropping scenes are interspersed throughout,

Do You Know Rudi Aquanikkio

So Dreaming Hollywood is punching well above its weight. The budget, at an estimated $75,000, is probably less than Quentin Tarantino’s weekly spend on video rentals.  It is possible to see that we are working on a shoestring.The lighting shows that we’re not on expensive sets and sound stages; outdoors look like it’s early in morning or later at night when there are not many passers by to spoil things.

But, as I’ve said before, lack of cash doesn’t mean lack of quality and I will be keen to see what writer/director Frank Martinez can do with a bigger budget.  One mystery is how Dreaming Hollywood fits in with a film called Fade Out Ray from 2020. It is, as far as I can see, the same as Dreaming Hollywood except it was written and directed by Francisco Martinez; the running time, cast, and characters are all the same!