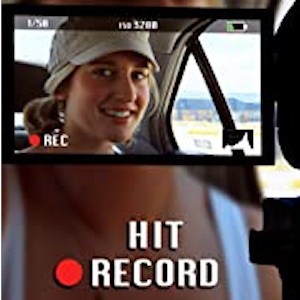 In the world of indie films, the documentary is probably the easiest to make look like a full budget outing; there’s no need for expensive visual effects, top quality acting, or high priced music and sound effects. The audience expects the speaker to be aware and nervous that they’re being filmed, as opposed to the slick professionalism of a good actor. The visuals can be in the form of amateur filmed and found footage, rather than precisely framed and focussed camera work.

In short, it’s accepted that corners can be cut.

That doesn’t make them second rate; it can add to the experience. I guess those rules can apply to mockumentaries as well. That gives a fair bit of latitude, especially for newcomers; that doesn’t mean that it can’t be well shot, well acted, and have great sound.


Hit Record features a lot of debut performances, particularly when it comes to the on screen talent, and let me make something clear… debut and amateurish are not synonymous during this film; every character is delightfully believable and excruciatingly watchable!

Hit Record tells the story of Shug Cherney (Shug Cvitanić), a pastor’s daughter who wants to become a pop singer like her idol P!nk. Her father, Pastor Cherney (Paul Suffridge), is more concerned about establishing a religious mission in Haiti. It’s hard to say who is using whom with regards to Shug and the film crew, but there is a clue in the film’s tagline – “They posted on Craigslist. She responded”.

Regardless, the film starts with Shug being met outside Choctaw High School by filmmakers Eric (Ethan Cvitanić) and Jordon (Leonard Jackson). They detour via her house where she chats about her hopes and dreams. Then they all go off to the Unwired recording studios where we first get to hear Shug performing as she lays down a track.

When the engineer Ryon Williams (Stephen Stark) plays it back, Shug is somewhat less than thrilled by the result.  Somehow she manages to put the blame on Ryon for not doing something with the vocals, and watching her while she’s singing; apparently she doesn’t like being watched while she sings, which could be problematic for a pop star. Shug decides she needs a manager, so she goes and recruits her best friend Dawn (Alex Hopper), who is currently living in a trailer and making a living rescuing cats from swimming pools. Together they head off into the world of photoshoots, recording sessions, public performances, and iTunes/FaceBook hits.

I said that Hit Record has a number of debut performances. These include the actors playing Shug, Dawn, Ryon, Pastor Cherney, and Eric, amongst nearly all the rest of the cast.

Also, as I said, debut does not mean amateurish; every one of the people who appear on screen are totally believable playing their roles. Although new to acting, Shug and Ethan Cvitanić are not new to the film world. As well as being the star of the show, Shug also wrote and edited Hit Record and has credits as producer, director, and cinematographer. Director, writer, and actor Ethan has a similar pedigree.

Hit Record has masses of talent on board and is not scared to show it off. Obviously spoiler issues prevent me from saying how Shug’s story plays out, but I will say it was a thoroughly enjoyable ride and I’d buy “Fuzzy Feelin’” if it was a real song! All in all, Hit Record is a marvellous film and I’d say that Christopher Guest, the mockumentary king, needs to keep an eye on this particular team as definite future competition.