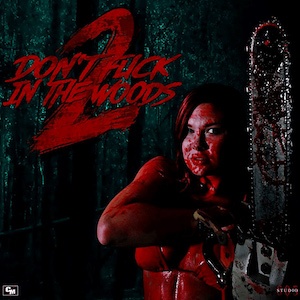 I’ll be honest that I was a bit worried sitting down to watch Don’t F* k In The Woods 2 as I hadn’t managed to see Don’t F *k In The Woods. Admittedly, that came out back in 2016 and before I had the opportunity to watch many independent releases. It turns out that I needn’t have worried.

The short synopsis is that there is some sort of quasi-phallic, slug like thing that lives in the woods in which we’re advised against fornicating. It can detect sexual activity and stalks its prey by, I’m guessing, following the pheromones and entering by the nearest orifice. I’m sure I don’t need to go into too much detail regarding the options available.


The reason I didn’t need to worry about not having seen the first part is because that short synopsis is, pretty much, all you need to know. It’s one of those films that is very superficial but that just makes it easy to follow. It was a prime example of low budget, switch off brain, sit back, and enjoy eighty minutes of nonsense!

As you might guess from the title and the synopsis, Don’t F**k In The Woods 2 is a sex and horror film with a fair few elements of humour thrown in. There’s copious amounts of bare boobs and bums, poorly choreographed copulation, and gallons of fake bodily fluids none of which comes as a surprise.

When I Said “Splash Out On The Special Effects…”

The cast threw themselves into the shenanigans with gusto and seemed to have a good time of it. During the end credits there are a collection of outtakes and everyone seems to be having quite a laugh on set. I mean, you’re making a film about partying, drinking and shagging…what’s not to like!

Given the attrition rate of the proceedings, there’s little surprise that there isn’t a vast amount of overlap between the casts of the two films. Brandy Mason returns as Meg, the sole survivor of the first film. On the other side of the camera the only returner is Shawn Burkett who is the writer, director, editor, and cinematographer on both.

All in all, Don’t F**k In The Woods 2 is an unobjectionable way to pass a bit of time provided you don’t mind a lot of blood, bums, and nipples! And if you are happy with that lot there was a tease about a third episode on the way!

I, for one, will happily see what it’s like.