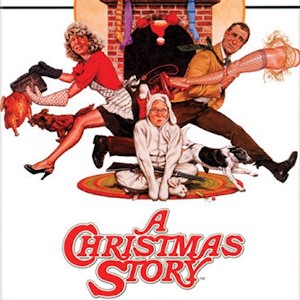 A little background… At the start of the decade a change in circumstances meant I had a lot of spare time during the run up to Christmas. So what was I going to do?

What I did was got hold of a load of Christmas films and thoroughly got into the spirit of the season.  Some were sickly sweet, some were overly cynical, but some just hit the spot. A Christmas Story came as a surprise to me. I remember putting it on just because I was running out of stuff to watch. But I ended up watching it three times in a day; I loved it!

You’ll Shoot Your Eye Out, Kid

Why would I love it? I wasn’t even born when the film was set. When I was born I was half a planet away. I didn’t have a little brother until I was nearly Ralphie’s age, so my Randy was a babe in arms when I was his age. I can’t remember seeing snow more than once and we never went out in it and, definitely, never got done up like the Michelin Man. I didn’t come from a society with a history of cowboys roaming the plains. When I was a child guns either fired little potato pellets or had a smoking strip of paper curling its way out after every shot.


And parades and marching bands!

What strange madness is this? We have nothing like that in the usual  run of things. I guess the nearest is occasional scout, guide, or cadet parades for Armistice Day or other such occasions, but not for Christmas and certainly not with a cast of thousands. It’s funny how an American “small town” always seems to have a population approaching that of a reasonably sized British county. If that many people were involved in a parade in a small English town or village, there’d be no-one left for the audience!

Then there’s the food. It’s supposed to be a running joke that every meal is meatloaf, mashed potatoes, and red cabbage, but I have never seen mash so white! I never had red cabbage until I was in my twenties. I was even older when I finally had meatloaf.

Randy wouldn’t eat? In my day you just had to sit at the table until it was all gone. Maybe that’s a first child vs second child thing though. And while we’re in the kitchen what was it with the furnace? I still don’t have one of those! There’s a small Combi boiler on the wall in the kitchen and that’s it.

The whole “double dare”, “double dog dare”, etc… that means absolutely nothing to me, and who’s uncle is he shouting for?

So what exactly was it that hooked me? First off, I was a little kid with glasses; I can find pictures of me at the time and I look disturbingly like Ralphie. And I did have dreams. I remember to this day the toys I wanted as a child. A chemistry set, yes I was a nerd, but you have to remember that the chemistry sets when I was a child were very different beasts to the weak, watery ones you get now. When I was a kid you could walk into the chemist’s shop and buy a bottle of hydrochloric acid to do your own experiments. The shop bought kits were borderline lethal!

Then there was the Secret Sam Spy Case and the Johnny Seven OMA (One Man Army). Just like Ralphie outside of Higbee’s, I used to have my nose pressed against the window of Beatties, just imagining the secrets I could steal or  battles I could fight. A bit late to think that they were selling for about thirty shillings then and they’re going for hundreds of pounds now. Mind you, I would have lost half the attachments, and there’s no way my mother would have allowed the box to keep cluttering the house up.

I have to admit to sharing the same delusional determination as Ralphie.

I’ve always been imaginative; sometimes that’s a good thing, sometimes that’s not so good… particularly when you’re trying to go to sleep. So I can empathise with Ralphie’s reveries. The number of scenarios I’ve practised in my head before the event, and the number that I’ve revisited afterwards; usually beginning with the words, “What I should have said was…”

The “Ohhhh fuuudge” scene rang true to me. Except I wouldn’t have been sitting with a bar of soap in my mouth. I would have, indeed was, treated like the hapless Schwartz. Maybe there’s something in the “being struck blind by soap poisoning” thing after all…

And I was one of those kids who collected tokens and sent off to join clubs, enter competitions, and all the rest that I was too young and innocent to realise was just an advertising campaign. I still remember seeing my name printed in a comic as one of the winners of a Stingray competition. It was just a pity that the Robert Williams listed came from somewhere down south.

I thought I was watching something older than I actually was.

A Christmas Story’s set in the forties but I thought, given the quality, it was probably made in the sixties, so 1983 came as a bit of a shock to me. I’d assumed it was one of those films that had done the rounds in the USA around Thanksgiving through to New Year and then settled into regular TV repeats, like the Charlie Brown things which never really caught on here. It was only a bit later that I found out that it was of an eighties vintage, and all the props, costumes, and settings had been meticulously researched and prepared.

So, overall, despite all the differences which should have rendered A Christmas Story meaningless to me, there were still enough things that resonated to allow me to enjoy it.

And enjoy it I have done… repeatedly. It has joined the ranks of films that get rolled out each year and contribute to the warm, fuzzy feelings that are at the heart of Christmas, whether you’re a believer or not… as long as you allow it to.