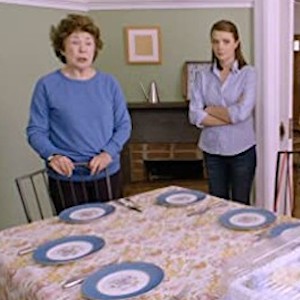 You only need to see the title – Crappy Mother’s Day – and you know that this film is aiming at being a comedy. Now I’ve spent in excess of six decades on this planet and know that, just because a film or TV programme describes itself as a comedy, that is no guarantee of there being anything remotely approaching humour on offer.

Similarly, there is the other side of the coin when something is described as a drama but has you rolling on the floor… One must have a heart of stone to read the death of Little Nell without laughing, as darling Oscar is alleged to have said.


And so we come to Crappy Mother’s Day. A faux newspaper spins onto the screen to herald the start of a parody of the sort of thing that Pathé news would put on when a trip to the cinema meant a ‘B’ feature, a newsreel, a cartoon, and the main feature with the staff wandering around flogging choc ices and kia ora out of a tray, while the adverts played in the middle.

That only lasts a minute and we’re into the film proper. A youngish couple, Sarah and James (Kristen Krak and Addison Anderson) are sitting in a coffee shop talking about the flats they’re looking at and thinking of buying. Then Sarah is panic stricken as another couple walks in. It turns out the new arrivals are Sarah’s mother, Totie (Jackie Debatin), and her partner, Dimpy (Bill Rutkoski).

The twist is that Sarah hasn’t told James her mother is still alive.  So everybody is, to a greater or lesser extent, pretty dysfunctional.

The main part of Crappy Mother’s Day takes place on, surprise surprise, Mother’s Day. That is, Mother’s Day as is celebrated in the USA. It always strikes me as slightly ironic that the really rather secular UK celebrates Mothering Sunday, which takes place on the fourth Sunday of Lent — about a fortnight before Easter — which, until it was appropriated by the greeting cards industry, was the celebration of your mother church, i.e. the church in which you were christened.

Meanwhile the relatively deeply religious USA observes a made up occasion in May.

Anyway, back to Crappy Mother’s Day. We have three generations of women coming together to celebrate the day; as well as Sarah and Totie there is also Grandma (Vivien Landau).  Sarah is relatively normal, Totie is a dope fiend and scrounger, while Grandma is, quite simply, as mad as a box of frogs. Throw in the equally deranged aunt and uncles (Marie Lenzi, Mike Rutkoski, and John Rutkoski), and it’s not really surprising that things don’t go as expected.

…Mostly Sweet, With A Few Nuts

So, does it work? Almost. There are a few reasonable laughs. Enough to keep you sitting until the end at least. I mean, we’re not talking Footlights or the Fringe, but enough outright silliness to keep you going. I admit that the occupants of Grandma’s house all seem to be slightly batty to the point of manic eccentricity: with their strange costumes, homemade vodka, and ad hoc recreations of Planet Of The Apes. They seemed to me to be written as though they should be living in a tumbledown shack or one of the less salubrious trailer parks, but they seemed to be living in a rather nice house in a rather nice neighbourhood.

The cast are an unusual mixture, ranging from relative newcomers, to stalwarts of TV sitcoms including Mike & Molly, The Office, Arrested Development, Malcolm In The Middle, and Two And A Half Men.

Sadly, the one credit that really sticks in my mind is a film I reviewed for RunPee — which, it turns out, features the Rutkoski brothers… Baby Frankenstein. I’ve only just stopped having nightmares about that one!