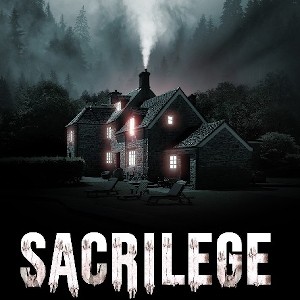 Sacrilege is one of those films which could have been a reasonable way to kill an hour and a half, in the tradition of the old Hammer horror films, which I remember fondly from sitting up with my father until all transmissions shut down… usually between half eleven and twelve.

We’d sit in the front room with the TV turned low, so as not to disturb my mother who’d invariably gone to bed, and watch something like The Brides Of Dracula or The Evil Of Frankenstein. He’d probably be having a nightcap while I scarfed down half a dozen rounds of toast… I was a growing lad! They were British horror films that got their scares in with clever editing, and built the atmosphere with music and lighting; it was years before digital special effects removed the need for imagination. They also had a story.


Sacrilege failed on a lot of counts.

In short, the story behind Sacrilege is that of four friends (Kayla – Tamaryn Payne, Trish – Emily Wyatt, Blake – Sian Abrahams, and Stacey – Naomi Willow) getting some bad news, and deciding to go away for a “bank account emptying”, random tattoo getting, memory losing, “silly break” in the countryside…hmmm…the first red warning light.

On the way there they pick up a hitchhiker (second red light) who tells them of the “unmissable festival” happening nearby (flashing red light), and drop him off shortly before meeting the unspeaking, surly groundsman (yet another light). Before long, we’ve racked up more red lights than a stag night in Amsterdam, but still they insist on staying.

Possibly due to them finding the specially adapted greenhouse and a supply of ready rolled fat ones.

Listen To Them, Children Of The Night

The cast, while being mainly quite young, do have a lot of experience, and may well be known to anyone who’s watched the British soaps Emmerdale, Coronation Street, Eastenders, Casualty, or Hollyoaks over the past decade. So, in the main, the acting was reasonable.

There were a few times when it all went a bit runny early on but, if I’m honest, the whole first twenty minutes were sub par, and could have been edited down to about five minutes and still got the same messages across. The worst part about the four friends is that we are supposed to root for them, but they give the initial impression of being totally vacuous and self-centered.

For me, one of the bright spots on the acting front was David English in his debut role as Tyler Creavy. He isn’t particularly well served here, as Tyler’s role isn’t properly explained other than an “oh my god he’s out of prison” moment. And moment it is.

Trish shows Kayla a news item on her phone and Blake explains to Jimmy the barman (Connor McKenzy) that Tyler beat Kayla into a coma. Why he did that is never mentioned, but he remains her bête noire for the duration of the film. And while his debut is a small part, his screen time is measured in seconds rather than minutes; he is delightfully creepy in a Bill Skarsgård/Pennywise sort of way.

We All Go A Little Mad Sometimes

My thoughts are that when David Creed was writing this he was thinking of reworking The Wicker Man, and not in a dodgy Nicholas Cage sort of way. There are pagans and a pagan ceremony (the previously mentioned “unmissable festival”) but whereas Sgt Howie was determined to get to the bottom of a mystery — and his faith was the driving force of his commitment — these girls are just out for fun. I can’t understand why they stayed at the most boring pagan ritual since Stonehenge had the undercoat put on it.

The other thing that was bugging me was this ritual was supposed to be to mark the solstice. Now, solstices occur twice a year, around the 21st June and 21st December, so they should have been in summer or winter. However, when they’re outside, they seemed to be in spring or autumn; I know we’re not renowned for our predictable weather but you can sit outside in the summer without needing a parka, and there’s nowhere near that much greenery about in winter.

Maybe someone confused solstice and equinox?

All in all, the idea behind Sacrilege, whilst having been done before, could have been done again just with tighter editing, nicer characters, a more engaging premise, and an ending that made sense!