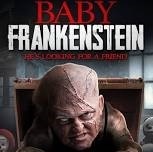 This was not a good film. The overall impression was that Baby Frankenstein was an E.T. wannabe, but with a laboratory experiment replacing an extra terrestrial. One group finds the ‘stranger’ and befriends it, and then have to protect it from another group who want to catch it.

So the first group consists of two teenagers, Lance and Truth (played by Ian Barling and Cora Savage), who find Baby Frankenstein in a padlocked room in the new house that they’re just moving into. I don’t know how things like buying houses are managed in the USA, but over here there has to be a survey done. To get the survey done every room in the house has to be examined — otherwise you don’t get a mortgage! I suppose they could have just bought the house for cash but, even then, wouldn’t you want to see what’s behind a locked door?

When Baby Frankenstein is found and activated, it sends a signal back to the lab which initiates the hunt to get him back. The main hunters, Glinevich and Van Sneed (played by Patrick McCartney and Yannis Stergiopoulos) are, I think, the comedy. At least I got the impression they were supposed to be the comedy, but they were hampered but a total absence of anything funny. They were boorish caricatures of tough guys and just came across as idiotic.


Fortunately it’s Halloween — which seems to last for weeks rather than just the one night  — and so the teen team (actually, if Lance is a teenager, then his mother must have been about six when he was born!) can get around things by dressing Baby Frankenstein up as a trick or treater. I guess it’s another nod to E.T.

When the two teams meet up the resolution is… disappointing. The whole film feels like a pantomime, and not a very good one at that. Throw in the poor editing and shaky camera work and the whole thing just feels clumsy.

It’s also badly balanced in that there isn’t enough action to justify a certification for an older age group, but just too much innuendo to put it into family film range. A few dialogue cuts and young teen or even child actors for Lance and Truth might have turned this into a cuter, more family friendly film.