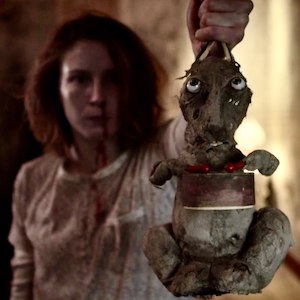 Anybody who’s seen many of my reviews will know by now that horror films are not my most favourite of genres. The jump cuts and use of mood music do little for me and I don’t subscribe to the religious and supernatural mythology that underlie the reasons why things are supposed to be scary. However, I can still appreciate a good story being well told, as well as good acting, camerawork, and effects.

Caveat is a strange little story. By little I only mean that there is a small cast, and limited sets. The gist of it is that Isaac (Jonathan French), a drifter with memory problems, is approached by Moe Barrett (Ben Caplan) to look after his niece Olga (Leila Sykes) who is living in an out of the way cottage. It’ll be £200 a day and should only take five days. Moe wants someone he knows to look after Olga and, allegedly, Moe knew Isaac before the accident that messed up his memory.

We now start straying into the area known as “willing suspension of disbelief”. Isaac and Moe pull up by the side of a lake. Isaac looks at the lake and, quite rightly, asks where they are. The cottage is on an island in the lake. “You never said it was on an island” says Isaac. To which Moe replies “I said it was out of the way. What does it matter if it’s surrounded by water” This is the first point where it is reasonable to say “Bugger this, I’m off” but, with minimal persuasion, Isaac decides to get in the little boat and go across to the island.

Perhaps the bigger reasons to turn and run start when they get to the house. “Olga has psychological problems”…hmmm. “She’s afraid of being assaulted but I can’t get a woman to come here.” OK, that one’s not too bad. “You will need to wear this” and produces a stout leather harness with a chain attached. “It’s ok, you can get anywhere in the house apart from her room. Think of it as a work uniform.” That is the point where I would be on my way back.

After all, Isaac doesn’t know Moe or Olga. Moe claims he does but he is desperate for  someone to mind his niece. Even if Isaac knew Moe before the accident he’s in a different place now. It does say in the blurb on the cover that Isaac is desperate for money but that isn’t made obvious in the film.

It’s Important To Have Quiet Time And Isolation

So there are bits that you need to overlook; the harness is held shut by a steel bar and a padlock at the front but there are large, easily reachable buckles on the shoulders. That’s besides the whole “Would you stay with all those conditions” and “Why don’t you stay. She is your niece!” And there are things that remain unexplained. What is the drumming rabbit all about? Why when Isaac finds a working phone he doesn’t ring the police?

Still, if you can get on board with that level of intentional avoidance of logic Caveat isn’t all that bad. It is well acted and nicely shot through with masses of atmosphere. Writer and director Damien McCarthy has made a better film than you’d expect for his feature debut. I’ll be interested to see what comes next.

chevron_left Is there anything extra during the end credits of Uncharted?
RunPee Weekly Newsletter #102 (February 23th, 2022) chevron_right