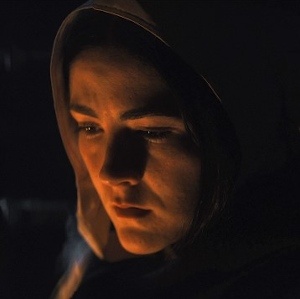 The Last Thing Mary Saw starts off as a stereotypical American Gothic horror; all darkness, black clothing, and moodiness set in mid 19th century New York. The first thing is a John Calvin quote “All events whatsoever are governed by the secret counsel of God”  which always seems to me to be saying “do whatever you want because it must be God’s secret plan” so pass the drugs, booze, and condoms. We then go in medias res (according to my Observer’s Book of Cinema Terms) and we are in the middle of a trial.

The rest of the film portrays the events leading up to the outcome and result of the trial which I won’t say too much about thanks to rampant spoilerdom. All I will say is that The Last Thing Mary Saw seems to be laying the ground for a sequel. Would I watch it? Given what I saw this evening my short answer is a resounding yes! Despite this genre not being in my list of favourites there was a lot more going on that made it very watchable.


By The Pricking Of My Thumbs…

So what’s it like? To be honest The Last Thing Mary Saw would definitely benefit from being seen in the cinema. I know that nearly all films benefit from being seen on the big screen but what this needs is to be watched in a darkened room.  If you saw 2018’s All Is True then you’ll remember that it caught the atmosphere of the 17th Century by being filmed using contemporary lighting; that meant natural light outdoors and candles indoors. The Last Thing Mary Saw has a similar dark, moody feel to it. This isn’t a bad thing provided you are in a darkened auditorium when every detail can be seen.

The next thing to mention is the cast. It has a cast that doesn’t ring a lot of bells; there is a Culkin involved but it’s Rory, the youngest of the brood. Everyone performs their parts well and it’s only after a flick through IMDb that you realise that there is a lot of cinema and TV experience on show here. The Mary of the title is played by Stefanie Scott and the source of her problems comes via Isabelle Fuhrmann who shot to fame as the eponymous Orphan Esther.

…Something Wicked This Way Comes

I may have picked up the wrong end of the stick but, to me, the main thrust of the story seemed to be that deeply religious people of that era had a tendency towards being spectacularly unpleasant if they thought there was something about you that was not in line with their way of thinking; spoiler alert –  being gay is, most definitely, not in line with their way of thinking! As part of Mary’s trial, she has to recite the Lord’s Prayer unaided and at gunpoint which was the point that it dawned on me that I might not have passed that test. As a child, I could only remember the words when I chanted them along with the rest of the people saying it which has left a sour taste in my mouth for all enforced, group expressions of commitment.

I’m not sure whether the interiors were shot on a set or on location but the whole thing looked authentic to me… this is the point when an expert in mid 19th Century door knobs floods the internet with errors that I haven’t picked up. Regardless, throw in an excellent score by experienced composer Keegan DeWitt on top of the story and direction by Edoardo Vitaletti in his feature debut and you have a very atmospheric thriller, rather than a scream out loud jump out of your skin horror. Make no mistake, this is not a high adrenaline scream fest. What you have in The Last Thing Mary Saw is mountains of tension being built up slowly and evenly.

I’m sure it’ll show well when it premieres at Fantasia 2021.

chevron_left Is there anything extra during the end credits of Respect?
Indie Movie Review – The Return chevron_right