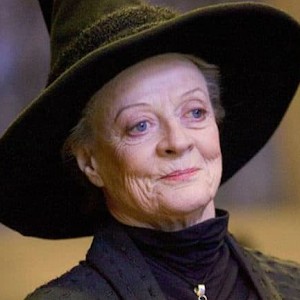 (Don’t Panic: Maggie isn’t dead. I just wanted to write a bit about one of my favorite actresses.)

Dame Margaret Natalie Smith, CH DBE, or Maggie Smith as she’s more commonly known, has been acting for very nearly seventy years. She started out as a student with the Oxford Playhouse in 1952 and made her professional debut on Broadway (Yes… that Broadway!) in New Faces of ’56. Since then she has been in over sixty films, more than seventy theatrical plays and twenty five TV shows even before Downton Abbey hit our screens.

And it’s not as though she’s been messing it up. Throughout her career she’s had one hundred and fifty seven competitive nominations and fifty eight wins. The wins include five BAFTAs, four Emmys, three Golden Globes, five Screen Actors Guild Awards, six best actress Evening Standard Theatre Awards, and two Academy Awards.


Throw in any number of fellowships, honorary doctorates, and special awards, and I’m guessing she must have miles of shelves and mantle pieces in her house. Failing that, the glitziest downstairs toilet in the Western Hemisphere.

Maggie Smith is one of those rare actors who have managed to not only maintain a career throughout their adult life but actually develop on it.

This is a feat that, thanks to the inherent sexist patriarchy that runs the entertainment industry, is particularly to be applauded. One of the few other women who’ve managed to pull this feat off is her life long (well… sixty plus years) friend, Judi Dench.  They met just prior to the Swinging Sixties and are both still going strong to this day.

One of Dame Maggie’s first big cinematic breaks was in The V.I.P.s in 1963. She plays the part of Rod Taylor’s love struck secretary, Miss Mead. The film has a genuinely stellar cast: Elizabeth Taylor, Richard Burton, Orson Welles, Louis Jourdan, and Margaret Rutherford — to name but a few. However, the thing that struck me was the way she’s introduced in the trailer as “London stage star, Maggie Smith”. She had appeared in a couple of films and TV shows prior to this, but was best known for her theatre work.

Another of Ms Smith’s long time friends was Kenneth Williams, who she met when playing opposite him in the 1957 musical comedy Share My Lettuce. He is still just about a household name in the UK, but might not be known further afield; he was a best known as a stalwart of the Carry On films, and as a stooge for Tony Hancock — both on TV and radio. It’s one of those unusual things you never notice until it’s pointed out, but she took a lot of her mannerisms directly from Kenneth Williams. To be honest, you probably have to be British and of a certain age to notice it but, when you do, it is so obvious that you can’t un-notice it.

The film that saw Dame Maggie get her first Oscar, for Best Actress, was in the title role in 1969’s The Prime Of Miss Jean Brodie.

During the sixties was when she met and married the man who played her love interest in the film, Robert Stephens; he played the louche, infatuated art teacher Teddy Lloyd. He was, for a long time, considered as the natural successor to Laurence Olivier. Together they had two sons, both actors, Chris Larkin and Toby Stephens… so maybe acting is something carried in the genes.

Perhaps demonstrating the bohemian lifestyle actors are supposed to live, Maggie Smith was in a relationship with screenwriter Beverley Cross before she married Robert Stephens and, when that marriage failed, she went back to him. They married in 1975, and were together until his death in 1998.

Perhaps two of Cross’s best known works are Jason And The Argonauts and Clash Of The Titans. It is the latter of these that starred Maggie as Thetis, and she used her long standing friendship with Laurence Olivier to persuade him to take the part of Zeus.

But, as though to prove that not everything in the garden is rosy, Dame Maggie has had her fair share of health concerns.

In January 1988 she had a diagnosis of Graves’ Disease, which required radiotherapy and eye surgery.  As if that wasn’t enough, she was diagnosed with breast cancer in 2008 and was receiving treatment during the filming of Harry Potter And The Half Blood Prince.

With her characteristic wit she said of the experience, “I had no problem getting the wig on. I was like a boiled egg.” Having supported someone while they went through that treatment, I have to say that it only deepens my admiration for the marvellous Dame Maggie.

The remainder of the twentieth century saw Maggie Smith in frequent and regular roles on stage and screens; I think it’s safe to describe her career as being steady and of high quality, but never putting her in the full glare of the celebrity spotlight. That all changed in the new millennium when the well-known series of books aimed at children and young adults was transferred to the cinema.  The end of the previous millennium had seen her in a TV adaptation of David Copperfield, which featured the sparkly new face of Daniel Radcliffe — soon to become the embodiment of Harry Potter.

Always intended to be the Headmaster of Griffindor…

Maggie Smith was Joanne Rowling’s favourite for the role of Minerva McGonagal, and now it’s hard to imagine anyone else in the role. Obviously being such a pivotal part of the Potterverse means Dame Maggie started getting attention from younger Harry Potter fans or, as she put it, “a lot of smaller people started to say hello to me.”

However, the spiky, irascible side which would be so well used in her next big role was never far from the surface, as when a child asked her if she actually changed into a cat — and before she knew it she heard herself saying “just pull yourself together!” And if that wasn’t straight out of the mouth of Lady Violet Crawley, Dowager Countess of Grantham, then I don’t know what was.

Unlike Dame Maggie, I have actually watched Downton Abbey, despite my Socialist tendencies which manifest themselves by me cheering on the downstairs staff whenever they try to make something of themselves. So, regardless of my usual lack of empathy for the aristocracy, I did have a soft spot for Lady Violet, which is one hundred percent down to Maggie Smith.

So you have two massive, life changing roles as you hit your seventh decade, that should set you up nicely for retirement… yes? Not so for Dame Maggie Smith.

April 2019 saw her return to the London stage for the first time in 12 years, to star in A German Life, a new play by Christopher Hampton. During this she was alone on stage, performing a hundred minute-long monologue to the audience, and her performance won her a record sixth Best Actress Evening Standard award.

And she’s not finished yet. She has films lined up, despite her assertion that even though she’s won two Oscars she doesn’t understand film acting. She’ll be in the film of A Boy Called Christmas with Sally Hawkins and Kristen Wiig, The Miracle Club with Kathy Bates and Laura Linney, and an adaptation of A German Life. It seems that there’s no chance of her slowing down… never mind retiring!

What You Need to Know to Watch the Downton Abbey Movie