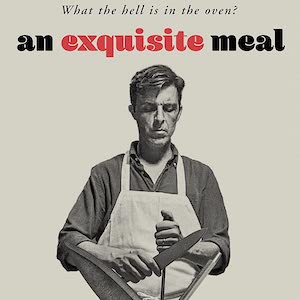 Talk about going in cold! Usually there is a bit of blurb or a summary on IMDb to get an idea of what I’m about to see. But, for An Exquisite Meal, this time there was nothing other than the genre boxes which said “Comedy” and “Thriller”. As the running time is only an hour I thought, “Well, it won’t take long to find out what is going on!”

It doesn’t take long before things start seeming strange. “I” marks the first part which sees a motorcycle delivery arrive and cross the path of a couple, Beth and Mark (Victoria Nugent and Ross Magyar) who go to a neighbouring house belonging to Irene and Dave (Amrita Dhaliwal and Mike Jimerson). A ring on the doorbell and they go in, admire the art (they just got back from India), and hand over the cheap and nasty wine they brought; this elicits a roll of the eyes from Dave.


Oh My, Your Place Is Amazing.

There’s a cut to an external shot which has a rather scruffy looking man (Mark Pracht)  arriving. He looks at the house, goes into the garden, and starts nosing around. Back inside, Dave offers drinks; they have wine and whisky (they just got back from Scotland). Apparently, Dave and Irene bought some scotch which was from a “small batch, only a couple of hundred bottles” and he doesn’t want to say how much they paid for it.

But he does and it was “$100 a box”. This confused me. Did he mean a case? That’s usually twelve bottles which makes it under ten dollars a bottle. Of course, it’s possible that he means one of those fancy, matured bottles that comes in a presentation box. For instance, there’s a fifty year old Glenfiddich which comes in a fancy box but that costs over thirty thousand dollars a bottle. Whichever it is, his scotch isn’t as expensive as he likes to make out!

Back outside and the shabby man is still mooching around the garden but, now he’s also peeping through the windows. Maybe he spots that the wine is a Chateaux Pontet-Canet Bordeaux. They range from around forty to four thousand dollars a bottle. I’m guessing it must be an expensive one because he comes to the front door, rings the bell, and blags his way in. Apparently, they’re expecting Charlie but shabby man gains entry by claiming to be a friend of Annie.

They Have Cable And Apple TV

Beth pulls one of those attention-grabbing stunts where she announces she’s not eating gluten. This surprises everyone including Mark who notes that she had a pastry for breakfast. Apparently, after that, she did not feel well so she has decided she must be gluten intolerant. Chef Dave says he can put the bread on the side; this also confused me as I didn’t notice any bread when he read out the menu.

Incidentally, the meal is…

Sounds ok to me, I’ve had worse.

Inside shabby man has been chatting with Beth and Irene and revealed himself to be Paul, an electrician. When the men return, Beth says “Mark, Paul’s an electrician,” to which Mark replies, “Oh wow, yeah, I’m half Hispanic.” If this is meant as an effort at humour it falls spectacularly flat. The only other reason for that line is that Mark is meant to be of a heavy-duty-to-industrial-level of stupidity.

Then the doorbell rings, we move into Part II, and the strangeness just continues.

Who is Paul really? Is Dave actually cooking anything? Is Mark actually as stupid as he seems? Is Beth really so hopelessly self-obsessed? Why is An Exquisite Meal described as a comedy?

It does start to tick some of the boxes concerned with being a thriller but, for me, there weren’t many laughs.

To be fair though, the strange does move in an unusual way, which is unsettling but enjoyable.

The relish with which Dave shows off his set of knives to Mark seems appropriately odd. Similarly, there are a few scenes shot in the kitchen but no one ever does what anyone does when in a kitchen while a meal is being cooked…comment on the smells!

As the perfect evening promised by An Exquisite Meal starts to unravel, so the shocks, twists, and jumps start picking up faster and faster.  How much is a dream or fantasy of the character and how much is required of our old friend — the willing suspension of disbelief — becomes hard to tell.

Part of the blurb for An Exquisite Meal describes it as “a darkly playful Buñuelian nightmare that’s full of punchlines and twists.” Admittedly, there were parts that reminded me of The Phantom Of Liberty but I always thought of that as a comedy. If you want Buñuelian nightmares you’re more likely to find them in Un Chien Andalou.

An Exquisite Meal does flirt along the borders of surrealism, but steps back before things get too, well, surreal.

Still, it’s beautifully shot and very well acted by the entire cast which, as well as the aforementioned, includes Emily Marso as Annie and Bassam Abdelfattah.

At an hour in length, An Exquisite Meal is pushing the distinction between a short feature and a long short but I rather admire what writer/director Robert Bruce Carter has done in making an interesting debut, and resisted the temptation to pad it out with less interesting material.