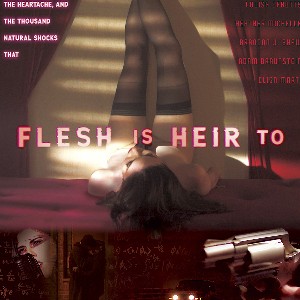 Recently, our UK RunPee reviewer Rob Williams reviewed this movie.  The movie studio complained, so we decided to give it another look.

I offered to watch it to give a counterpoint review.  However, I didn’t enjoy the movie any more than he did.  (Note: I have not yet read his review so as not to taint my own.)  In fact, this is the least enjoyable film screener I’ve watched so far.  While Thirst was offensive, at least it was fun in an over-the-top kind of way.  There is very little entertaining about Flesh Is Heir To.


Flesh Is Heir To is pretentious

Flesh is Heir To is trying to be two things at once: an avant garde film and a conventional thriller.  It fails at the first and half succeeds at the second.  There’s an episode of South Park where Cartman says all indie films are about gay cowboys eating pudding.  This is a gay cowboys eating pudding movie.  It switches between black and white and color for no discernible reason.  There are montages that make no sense.  Even the music becomes heavy handed towards the end.  The lyrics become blatant and obvious with lines like, “Men think they’re better than women.”

I honestly wish the director had chosen to make a documentary instead.  Then their points about how many women go missing each year and how little effort is put into finding them might have actually resonated.

The quote, “If you want to send a message, call Western Union,” has been attributed to both Samuel Goldwyn and Moss Hart.  Either way, it is apt advice.  Writer-director D. Allan Johnson wants to say something important about feminism.  However the message is jumbled and unclear.  The movie is less of a statement and more of a manifesto.

Why I Hated Flesh Is Heir To

I actively hated this movie.  If I wasn’t reviewing it, I would have turned it off after the first ten minutes.

Usually when I’m watching a movie and making notes for my review, there comes a tipping point where I get lost in the film and start making fewer notes.  That didn’t happen this time.

The first act is a mess, with no discernible story line to keep the viewer interested.  Most of the acting is horrible, with Louisa de Butts in particular chewing the scenery in nearly every scene.  I could not stand her character.  She plays a scientist named CeCe,  who’s intelligent enough to work on the Hadron collider at CERN, but dumb enough to keep sleeping with a man she suspects is a murderer.

Her boyfriend at the start of the film is little more than a strawman, meant to represent some form of misogyny but whose sins really don’t add up to much.  He’s a cartoonist.  They have an argument when he won’t consider drawing her (probably) offensive joke about Jesus and Mohammed walking into a bar.  Because only a jerk wouldn’t want a fatwa declared on him.  What a male chauvinist!  The argument ends with her melodramatically declaring, “Truth is my god!”

You know how Elvis used to shoot televisions?  If I had a gun, there’d  probably be a bullet hole in my laptop.

The boyfriend is soon thrown over when CeCe decides to hunt down a potential killer, seduce him, and murder him.  She inexplicably decides not to kill him the first time they make love.  Then a scientist friend convinces her he might only be a killer in an alternate universe.  So she keeps sleeping with him.  There is no shred of complicated feelings she may have about cheating on her boyfriend or leaving him to kill a man she ends up falling in love with.  The character is obviously mentally ill, yet anyone who treats her as such or suggests as much is treated like a villain.

I hated this character so much…

I did not believe this was a real person that could exist.  I’d love to show this movie to a therapist to see what they would diagnose Cece with.

I didn’t think I would hate a movie this year more than Hillbilly Elegy, or that I’d hate a character more than Amy Adams’ portrayal of an abusive mother.  I was wrong.

Cece also declares in another scene:  “We all have vaginas…We control pleasure, so men control us.”  Because apparently only heterosexuals can receive pleasure in the world of this film.

The two bright spots in the movie are Heather Michelle as Charlie and Brandon J. Shaw as Jordan.  They actually have acting talent, and I’d love to see them in other projects in the future.  I feel like they could both be amazing with better material.  I also enjoyed most of the music from the band Kill the Standards, which is sprinkled throughout the film.

The movie has a couple of lame plot twists towards the end.  For a moment, it looks like the film has an actual ending that makes sense.  Then the director throws in an unnecessary WTF montage that ruins it.

Final thoughts on Flesh Is Heir To

If I haven’t convinced you to stay away from this movie at this point, there is nothing else I can really say.  I would flunk this movie but I did like the music and two of the actors.  So instead I’ll give it the next worst thing.

chevron_left Is there anything extra during the end credits of Voyagers?
Indie Movie Review – 86 Melrose Avenue chevron_right