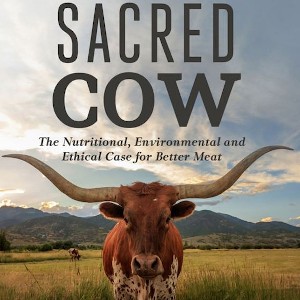 Sacred Cow or Sacred Cow: The Nutritional, Environmental and Ethical Case for Better Meat, to give it its Sunday name, is a documentary about meat. Eating it, preparing it, cooking it, raising it  — from semen collection to serving up… almost. Perhaps not so much of the semen end of the process; that was a different time of my life. I’ll be honest and say I was expecting one sort of film, but it turns out that Sacred Cow is a completely different ‘animal’.

I suppose I should say right from the start that I am a meat eater. I take the view that anyone with a rudimentary grasp of human biology and dentition can see straight away that homo sapiens are omnivores, designed to eat meat and plants.


My concerns are for the welfare of the animals. There are a variety of, hopefully, tongue in cheek arguments that say that if an animal is mistreated, then its early demise will be a relief. I feel that animals should be treated humanely for the entirety of their lives. Yes, this might raise the price of a chicken or a joint of beef, but that is a price I’d be prepared to pay.

This Was More Than Just A Cow, This Was An Entire Career – Gary Larson

I fully expected Sacred Cow to be on the side of the argument that says killing animals for food is wrong. Maybe it was the title which led me to expect this film to have plenty of scenes of animals being mistreated, frightened, and slaughtered, typically in that order. The more astute amongst you will, by now, have realised that it either wasn’t, or I’ve severely messed up the tone of my intro.

Instead, Sacred Cow probes the fundamental moral, environmental and nutritional quandaries we face in raising and eating animals. For instance, regardless of which side of the fence you are on, there is a well known argument that eating red meat is bad for you, but where did that fear come from?

It seems that the danger is processed foods rather than meat. Processed food is designed to stimulate appetites so there is a desire to overeat. There are nutritional requirements to eat fat and meat. The problem arises with quantity consumed versus number of calories needed. It is an excess of meat eating; eating meat as part of a combined meat and plant based diet shows no significant health risks. In fact there is presented evidence for the damage to health presented by veganism.

My Cow Is Not Pretty, But It Is Pretty To Me – David Lynch

While there are appearances by vegetarians, vegans, and animal rights activists, there are also people presenting other arguments. Agriculturalists say that it is the industrialisation of the farming processes that is doing harm to the food production infrastructure and we should, instead, be looking towards a regenerative farming system. This focuses on topsoil regeneration, increasing biodiversity, improving the water cycle, and strengthening the health and vitality of farm soil.

Then there are the farmers who raise their animals with compassion. They make sure the animals have room to live, so are raised in fields rather than in pens. When the time comes for slaughter it is done calmly and peacefully without stressing the animals. Is it perfect? Well, from the animals point of view, probably not, but I can’t help but think it’s a lot better than mass production and intensive farming methods.

I can’t help but think that if everyone stopped eating meat, not one animal life would be saved. People wouldn’t let the animals die a natural death; they’d all have to be slaughtered or they’d starve to death. Sacred Cow shows that there is a better way forward.