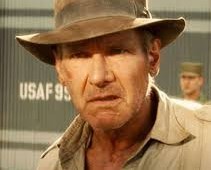 Harrison Ford is going to have a hard time being believable in adventure films if Indiana Jones 5 is put off much longer, but it’s exactly what he — and us — are facing. Now we won’t get to see our favorite globe-trotting, death-defying archaeologist in action again until July 2022.

With Disney’s Marvel Phase 4 film roster pushed back due to CoVid-19′s Hollywood shutdown, all other Disney films — like the popular (but aging) Indiana Jones franchise — had to be pushed back, and back again. The as-yet unnamed Indy film had a prior release date of  July 9th, 2021. Now it’s looking like “Junior” will be as old as his dad was (Sean Connery, in a fun turn) in Indiana Jones 3: The Last Crusade. Harrison Ford himself will be 80 in the fifth film.

(Not that being 80 is a bad thing in action entertainment these days. Patrick Stewart’s titular character in the successful new Star Trek: Picard is doing just fine at 79.)


Steven Spielberg was lined up to direct Indy 5, but Deadline reports he backed out.  Current directorial darling James Mangold, of Logan and Ford v Ferrari fame, is rumored to take Dr. Jones on his next adventure.

Going with Mangold is just as good as Spielberg, anyway. Can’t go wrong either way, and as long as we still have Ford to ply a whip with his trademark crooked grin, then the summer of 2022 should be a good time at the movies.

Marvel Phase 4 reset almost all of their release dates