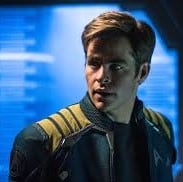 We’re actually not sure if Chris Pine is still boldly going. (Yes, this can be taken either way.)

As of this weekend, we now know a few new things about the uncertain status of the on-hiatus, as-yet-unnamed Star Trek 4 movie film. For people following the saga of the Kelvin Timeline Star Trek movies, both both Chrises walked out on the planned post-Star Trek Beyond film, due to breakdowns in salary negotiations with Paramount. Chris Pine and Chris Hemsworth, to reprise James Kirk and George Kirk — James T’s father — respectively, were told their previously-agreed-to salaries would be dropped, after the disappointing box office returns of the 3rd aforementioned feature. The actors walked.

Here’s some Star Trek Movie News and Speculation, for your “continuing mission” pleasure: