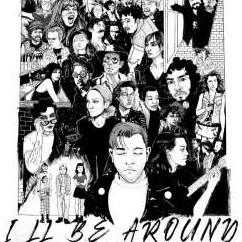 I’ll Be Around starts off like so many films, with a scene showing a band on stage and about to start, and then cutting to a scene with a card saying: A few hours before showtime.  Now I know the theory behind this trope is to build up a sense of excitement and anticipation but, two hours later, I was just mildly relieved it was over.

I think I’ll Be Around features various groups of thirty somethings who are still trying to make it as post-punk musicians, all meeting up at a music festival and trying to get their big break.

I say “I think” because I’m not 100% sure what was going on. Punk came on the scene the first time I was in college (1975-78), so post-punk, technically, can be anything from about 1980 onwards. So, why are a group of people born, presumably, in the ‘90s bothered or interested by it?

Also, my understanding of post-punk is that it is a style of music that has developed after, rather than out of punk, and tends to be more sophisticated. When I think of post-punk I think of Joy Division, The Cure, Talking Heads, etc. As when the lack of talent could no longer be hidden merely by playing louder and faster. I’ll admit that I’m an old school prog rock fan, so I couldn’t actually get on board with the music.

The other things that I’ll Be Around lacked was a coherent story, believable characters, reasonable acting, and interesting dialogue.

There seemed to be a random assortment of characters involved in trying to get into somewhere they weren’t allowed; trying to raise money; selling, stealing, or buying cookies; or claiming that every act they saw was ripping off one of their songs.

It might have been less confusing if a couple of the storylines were picked and stuck with.