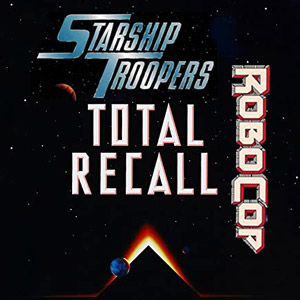 What have the following all got in common: Robocop, Total Recall, and Starship Troopers?

All three are cracking — if a bit O.T.T. — films by Dutch director Paul Verhoeven.


Usually a term like ‘maverick’ is thrown in at some point but, as the only other Dutch director I’m aware of is Jan de Bont, I don’t know how maverick or not he is with relation to his Dutchness. Unfortunately, there is another connection…and that is woeful remakes. I’m not talking sequels here… a lot of Verhoeven’s films spawned sequels, but never with him at the helm, and they all lost some of the magic because of that.

Robocop (1987) is probably best described as a Sci-Fi/Action/Comedy. Experienced cop gets transferred into a high crime area. First day goes spectacularly badly and he ends up being brought back like a chewed up piece of gristle. Unfortunately, as it’s his first day and he hasn’t built up any sick leave, they stick the bits into a suit of armour and whack him back on the streets.

During the course of events he gets his memory back, realises who killed him, who was in charge, and goes off to right all the wrongs.

The 2014 remake follows some of that story, but manages to lose most of the violence, social satire, and humour. With the likes of Gary Oldman, Michael Keaton, and Samuel L Jackson on board it should have been mighty instead it was — being generous — adequate.

The sequel was cancelled and, instead, they’re looking at doing a reboot of the original series, picking up from the original and bypassing the increasingly ludicrous 90’s sequels.

Total Recall (1990) was, again, a Sci-Fi/Action/Comedy. Whereas the humour in Robocop came mainly from the satirical adverts, in Total Recall it comes from the situations and seeing Arnie gurning his way through the scenes; the sight of him pulling a glowing golfball out of his nose still makes me smile! At the time it was one of the most expensive films to be made, and may even have held the record at one point. All in all it was a fun filled romp.

The 2012 remake was another example of a stellar cast being assembled but missing the mark. Gone is the Mars subplot, replaced by a tunnel between London and Australia. The humour has gone completely, along with any character development or emotional subtlety. Colin Farrell was good, as usual, as was Bryan Cranston… well, right up until the big fight at the end when it looks like a teenager beating up his dad.

And we’re left with the splendid Starship Troopers (1997), which was mauled by the critics on release but has since gained a more positive reception. Over two hours of non-stop gory fun and frolics taking the rise out of the militaristic society of the distant future. Whereas Verhoeven’s Robocop was punctuated with mock adverts satirising the rampant consumerism of the time, Starship Troopers is interspersed with mock fascist propaganda. As is typical with European’s working in the USA, Verhoeven had no problem showing horrendous injuries and mutilations — but the mixed shower scene was a problem!

But now there are rumours of Hollywood continuing not to learn from their mistakes, and planning a new version of Starship Troopers. Maybe they think the ultra-fascist sentiments will play a bit better to today’s M.A.G.A./Brexit audiences. It doesn’t bode well that Joseph Kosinski, director of such sci-fi non-classics as Tron: Legacy and Oblivion, is being suggested as the source for the re-imagining. Paul Verhoeven has expressed his skepticism about the remake, thinking that it will end up as a celebration rather than a condemnation of the fascist and militaristic nature of the source novel.

I just hope they learn from Paul Verhoeven and take it seriously, but not humourlessly.