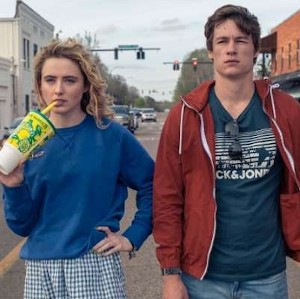 The Map Of Tiny Perfect Things is the latest addition to the Groundhog Day time loop sub-genre so there’s a certain amount of stuff that is known from the start; the protagonist is experiencing one day over and over again. Having realised what is happening, they learn to live with the situation by learning what’s going on around them, and how they can interact with them to make things better — more amusing, more tolerable, etc. — until they can work out what they need to do to break out.

The Map Of Tiny Perfect Things features Mark (Kyle Allen) and Margaret (Kathryn Newton) as two teenagers who, on the stroke of midnight, go back to the beginning of their day.


At first we only know about Mark and it’s obvious from the start that he’s lived this day many, many times before; catching a mug his sister knocks off the table, knowing all the answers to his father’s crossword, synchronised speech to wind up his sister… all this says that he is either exceptionally bright with lightening fast reflexes, or we’re in a Groundhog Day scenario.

This little domestic scene gives way to a delightful opening credits sequence of Mark cycling through town, responding to all the things he’s seen so many times before; sprinklers starting, lost keys, forgotten drinks, and even a nicely done bit when he saves a woman from a wardrobe embarrassment.

By Temporal Anomaly I Mean…

Being a teenage boy he’s interested in copping off, and one of his recurrences is seeing a lost girl, Phoebe (Anna Mikami), and giving her directions to where she wants to go before she asks him. He passes this off as a Sherlock thing, which she loves, and keeps re-iterating the day until he perfects the meet-cute.

Other iterations have him giving different reasons for knowing where she wants to go, and she loves them all, so my guess is he’d have been all right anyway; sadly he bores her stupid on the walk home. All this is shown in a nice sequence with Mark chatting with his friend Henry (Jermaine Harris) and leads up to his plan being thwarted by the arrival of Margaret.

This day occurs in the middle of the long summer holiday when Mark is supposed to be attending a maths summer school, but being a teenager blessed with the gift of perpetual procrastination, he spends his day reading Douglas Adams books; I’ve got a degree in Applied Maths and read everything Douglas Adams wrote, and I know which was more fun and, arguably, more use in the real world.

And that’s not where the pop culture references end… Time Bandits, manga books (Tokyo Zombie by Yusaku Hanakuma), and console-based, first person shooters all get checked. As for the big one, well as he’s discussing his situation with Henry and we’re set in the present day, it’d be silly if Groundhog Day wasn’t mentioned so, obviously, it is.

I Know What A Temporal Anomaly Is

So Mark and Margaret meet up and realise they’re in the same situation. Being teenagers, they have a typical light and frothy approach to the situation; not so many determined explorations of ways to commit suicide, more finding seemingly improbable, funny occurrences in the world around them. They experiment with tattoos, hair styles, over eating, and drawing out loads of money and putting it in random greetings cards in the supermarket.

Then they hit on the plan that The Map Of Tiny Perfect Things gets its name from. All the little things that bring a smile to their faces need to be found; the janitor giving a virtuoso piano performance with no audience, the moment an eagle plucks a trout from a pond, a man sitting on a bench when a truck pulls up and make him look like he has wings. These are all plotted on a map, but it’s Margaret’s superior maths skills which will solve the problem… they hope!

The Map Of Tiny Perfect Things is, quite simply, a joy to watch.

Along with every other film in the sub-genre, there has to be a massive suspension of disbelief to go along with the basic premise of time loops. However, once that’s done, the rest is easy. The main cast are believable as eighteen-ish year olds both in looks and behaviour. The things that they choose to do and the way they respond to the world around them struck me as the way I might have behaved at that age.

Technically, it is well done; nicely acted, beautifully shot, good sound, etc. and the story, including the way they end it, leaves you feeling warm and fuzzy. Oh watch out for the “bird poo man” — you’ll know when you see it; that’s a cameo by Lev Grossman, who wrote the original short story.