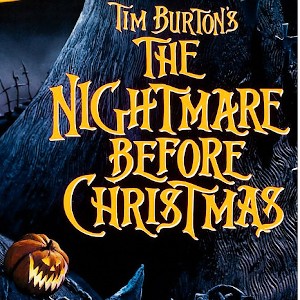 Full disclosure… I am a big Tim Burton fan.  I’ve seen and enjoyed all of his films. Yes… even his Planet Of The Apes! And the thing is that you tend to think of him as a live action director, albeit with an eye for the more cartoonish aspects of life.  So, is that why he didn’t direct The Nightmare Before Christmas? Well, no. He was busy finishing off Batman Returns and in pre-production for Ed Wood at the time, and he has gone on to direct two animations since then; Corpse Bride in 2005 and Frankenweenie in 2012 — so I’m guessing he’s found a way of working around the notoriously long shooting schedules for stop-motion animation.

The story follows Jack Skellington, the king of Halloween Town (Chris Sarandon, with Danny Elfman singing) who has just overseen a successful holiday night. It’s all over and Jack is feeling down and thinking “is that it?” while he goes for a moody walk. He ends up walking into a clearing in a wood where he sees seven trees with painted doors set into them. The doors are painted with images representing holidays: a pumpkin for Halloween, a decorated tree for Christmas, a painted egg for Easter, a turkey for Thanksgiving, a heart for Valentine’s day, a clover for St Patrick’s day, and a firework which must be for Guy Fawke’s night… surely? I mean, if you are going to have a holiday that spends a fortune on fireworks you’d want to hold it when it gets dark sometime before midnight, yes?


Anyway, Jack ends up in Christmas Town and is so delighted by what he sees that he decides to give the people who live there the year off, and that he’ll organise the next holiday for them. Actually, that makes it sound like he’s doing them a favour. In reality he’s organising a hostile takeover. Obviously, everything goes catastrophically wrong and has to be rescued by Sandy Claws… because he’s big and red.

How Horrible Our Christmas Will Be

But this is a Tim Burton story and most definitely his vision. And not just because his name appears over the title. While you watch it you keep thinking “that looks like…” or “I’m sure I’ve seen that in …” and then it dawns on you. You’ve seen them in films like Beetlejuice or Batman! In short, you’ve seen them as products of Tim Burton’s imagination.  The sandworms in Beetlejuice and the carnival balloons in Batman are of a style — and that style is Tim Burton. The Nightmare Before Christmas is all in that style.

The story originated in a poem Tim Burton wrote in 1982 while working as an animator for Disney. It’s one of those things that differentiate creative geniuses from the rest of us. Who amongst us hasn’t, at some time or other, thought “Good grief, they’ve got all the Christmas stuff out and we haven’t had Halloween yet!”? Tim Burton had that same thought but, while we would just mutter and mumble, he sat down and wrote the poem that became The Nightmare Before Christmas. First thoughts were of making it into a half hour TV special, but Disney thought it “too weird” and shelved it. After seeing the success that Tim Burton made of Beetlejuice and Batman, Disney went back to the project and decided it wasn’t too weird after all.

As I said before, Burton was tied up with the Batman sequel and his Ed Wood biopic, so directing duties went to Henry Selick in his feature debut.

Elfman’s music and lyrics are wonderful. By turns, funny, thoughtful, and memorable. In some ways things were done a bit back to front in that Danny Elfman sang and recorded all Jack Skellington’s songs and then Chris Sarandon was cast as the speaking voice, as he sounded like the voice that had sung the songs. Danny Elfman does get to speak a few words as one of the hapless trio sent out to kidnap Sandy Claws, along with Paul Reubens and Catherine O’Hara. He also has a cameo of sorts; when the three piece street band appears there is a head inside the double bass… that’s Danny Elfman!

One song that stuck in my mind was the one which introduces the main villain Oogie Boogie (Ken Page), and that’s because it’s an homage to the old Cab Calloway number Minnie The Moocher — which you’ll all know from The Blues Brothers.

Jack Skellington gets around

He first appeared in Beetlejuice; his head can be seen atop Beetlejuice’s carnival hat. He also makes cameos as a pirate skeleton in James and the Giant Peach, as a shadow in the The Princess and the Frog, as a print on the Mad Hatters’ bow tie in Alice in Wonderland, and inside an egg in Coraline.

Where you won’t see him, though, are as a ride in Disneyland or in a sequel; Tim Burton still holds fifty per cent of the rights and has vetoed the ride in perpetuity, and the sequel, until a story that is as good as or better than the original. So far we’re at twenty seven years and counting!

So… I like it, my daughter likes it, and my two and a half year old grandson loves it. That’s a range of over sixty years in one family.

First View Movie Review – The Princess and the Frog

chevron_left CoVid Life: How to use the bathroom in movie theaters
Rewatch Review – Deck The Halls chevron_right