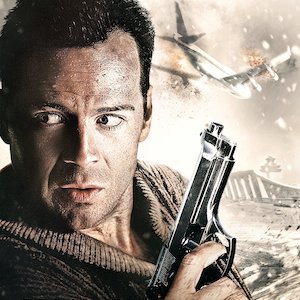 Time, it’s a bugger, isn’t it. Die Hard 2 came out about five years ago… in 1990! After a sit down with a nice hot cup of tea and a biscuit, nothing too exciting… a rich tea or a plain digestive, it does dawn on you that it’s now over thirty years old. When we were talking about including this in the Christmas round-up, Jill (she’s the high priestess of RunPee) got quite excited about a film set in and around an airport back in the last century and the differences that have arisen post 9/11 and post COVID-19.

I’ll be honest and say that it never occurred to me, as Die Hard 2 was probably still showing in the cinemas when I last flew! But I’ll come to that in a wee while.


Last year we looked at “are these Christmas films or just set at Christmas?” and Die Hard 2 did get an en passant mention. It was decided that, while Die Hard could just be shoehorned into the Christmas film category (a weary traveler, a pregnant woman, gifts, and celebrating the value of family and the spirit of friendship) Die Hard 2 could have been shot at any time of the year, especially if you change the snowmobile chase to one on mopeds.

So, now I’ve thrown Die Hard 2 out of the Christmas Club [Jill: Nope, it’s totally still on the list], it looks like we’re just into classic rewatch territory. Does Die Hard 2 deserve its place in the ‘classic’ category?

So what are the time-related differences? As that subheading shows, one pointer was the use of a fax machine. Nowadays, if you don’t work in healthcare or the government you probably won’t use a fax, as documents are routinely emailed around the world. Shame really, seeing as how it’s been around longer than the telephone!

Another big difference is one which I have mentioned before…smoking! When I watched The Beatles: Get Back the amount of smoking on the show was notable for the frequency and ubiquity of the act. This time it was mainly Bruce Willis doing the smoking, but he more than made up for the rest of the cast…light ‘em if you’ve got ‘em, indeed!

There were other time-related oddities, but that could have been down to artistic license and the need to drive the story along. For instance, there is a sweet old lady in the next seat to Holly McClane (Bonnie Bedelia) who has a handheld taser type thing. I don’t know if they were allowed on as hand luggage in the time before security was beefed up, but I think they may have insisted it went in the hold even back then. And when Holly was given a complimentary champagne there was a definite clink as the bottle tapped the glass and she wasn’t in first class.

Perhaps one of the biggest indicators of the passage of time is the appearance of some famous faces in minor roles. Colm Meaney, now better known as Chief O’Brien from the Star Trek universe, is the pilot brought down as the ‘lesson’ from the terrorists. John Leguizamo and Robert Patrick both have small parts as members of the bad guys team. And then there is a blink and you’ll miss it shot of a very young, long haired Liev Schreiber when he was an extra; at about the six minute mark when McLaine bumps into Colonel Stuart (William Sadler) — keep your eye on the people passing behind them.

We’ve Got A New SOP For DOAs From The FAA

There are some little bits and pieces which might be called Easter eggs if they were intentional rather than coincidental.

For instance, General Ramon Esperanza (Franco Nero) is from Val Verde, which is a fictional country invented by writer and producer Steven E de Souza for Commando. That starred Arnold Schwarzenegger who, the year before, was in Terminator. The sequel to that, Terminator 2: Judgement Day stars Robert Patrick who, the year before, was in…Die Hard 2!

And then there is the passenger next to Holly McClane who has a magazine with an advert for Lethal Weapon 2. Both Mel Gibson and Bruce Willis were considered for each other’s roles of John McClane and Martin Riggs but turned them down, and it went to each other vice versa. Apparently, both Riggs and McClane use a Beretta 92F.

Another little factoid about Die Hard 2 is that it was the first film ever to get embroiled in a product placement legal dispute. The scene when McClane comes up from a tunnel under the runway, only to find the hatch is padlocked was originally supposed to see him drill the lock off rather than shoot it. When Black & Decker found out about the change they sued 20th Century Fox but instead settled for $150,000 out of court.

Another point is the one liners in Die Hard were mainly ad-libbed by Willis; there weren’t many in the original script. They went down so well that more were written in and Willis was given free rein to ad-lib to his heart’s content.