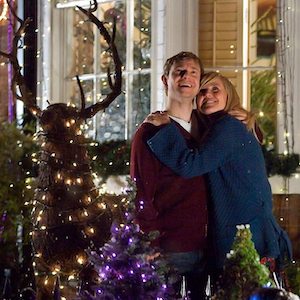 Ah, Nativity! My wife doesn’t watch a lot of films but she watched and enjoyed this one. She does work in a primary school so there may have been some resonance for her there. I thought I’d give it a look because of the fine array of talent connected to it and, I thought, it wasn’t too bad; the story has been done before, and probably a lot better, but it’s definitely not the worst…provided you accept the usual caveats regarding ignoring stuff that would never happen or be allowed!

In short, the story concerns a trio of people who met at drama college. Two go off and end up teaching in primary schools while the other goes to Hollywood.


The two teachers end up as rivals concerning the production of the school nativity play; one being the perennial winner, the other always failing miserably. The miserable failure pretends to get help from the Hollywood dweller and it all gets out of hand.  The bottom line is will the underdog win this one time or fail yet again?

As I said, done before but, then again, there is that theory that there are only seven or eight stories in drama so there’s bound to be some sort of overlap and replication. Actually, Georges Polti went as high as thirty six, but you get my drift.

So, we’ve done a swerve around the story…what about the talent that I mentioned?  For a kick off the lead of Nativity! is Paul Maddens played by, one of my favourites — Martin Freeman — and his nemesis is Gordon Shakespeare (Jason Watkins). The third of the drama school trio is another favourite of mine, Ashley Jensen playing Jennifer Lore. She is, in my opinion, wonderful, and doesn’t get seen anywhere near often enough. Throw in Pam Ferris playing another headteacher (this time a much nicer person than Trunchbull in Matilda), cameos from Clarke Peters, John Sessions, Phyllis Logan, and Alan Carr and you can see that it’s quite an accomplished cast.

Another name that stood out for me was that of director and writer Debbie Isitt. Debbie Isitt first came to my attention on the marvellous series of comedy lectures Jeremy Hardy Speaks To The Nation, in which she was hilarious. I suppose that’s not the best reason to follow a director or writer, but it’s not a bad idea when they’re making a comedy.

The other stars are all the children involved. None of them have acted before and they were all gathered together following an open casting call in the Midlands, UK. As the credits roll they show snippets of, I’m guessing, the different kids doing their party pieces for auditions.

Gawd Bless Us, Every One!

The actual way that Nativity! was made is also slightly different. There was no script. Whoever was in a particular scene was given a rough outline, the cameras rolled and they improvised away to their heart’s content. Over a hundred and twenty hours of action was shot which was then edited into the hour and three quarters of the finished film.

It must have been reasonably well done as it spawned three sequels; Nativity 2: Danger In The Manger!, Nativity 3: Dude, Where’s My Donkey?!, and Nativity Rocks!

For me the only fly in Nativity!’s ointment, apart from the over-reliance on exclamation marks in the titles, is the character of Mr Poppy (Mark Wootton) who is the main reason to need the willing suspension of disbelief. It is impossible to believe that anyone would allow him into a position of responsibility for children, let alone get away with some of the ways in which he behaved. Still, Nativity! is the best of the four outings. Having said that the series didn’t so much go downhill as plummet like a piano on a steep roof… in a high wind.