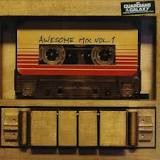 The Guardians of the Galaxy Awesome Mix volumes are now complete! James Gunn’s entire list of Meredith Quill’s favorite songs are on a playlist everyone can listen to. It’s Gunn’s personal quarantine gift to the world.

Not to mention dropping the entire Awesome Playlist on Spotify.

Remember Meredith Quill, Star Lord’s mother? She adored music, and sharing it with her son was Meredith’s way to show she loved him. Her final gifts to young Peter were cassette mix tapes (remember those?) titled simply: Awesome Mix, vols 1 and 2. And they are indeed awesome. These contain some lesser-known tracks or one hit wonders from the 70s, music Peter Quill associates with home, family, love, comfort, and joy.

Music can do that for us. Music activates the memory centers of the frontal lobe; it transports people to other times and places, reducing stress, pain, and depression, along with numerous other benefits. No wonder Star Lord risked life and limb to get his precious Walkman back.

I can’t imagine anyone loving Guardians of the Galaxy as much as I do (have YOU ridden the Disney Guardians ride 6 times to get every mini-story?), but I know there’s some competition out there. Awesome Mix Vols 1 and 2 are on my daily playlist. I croon and dance around wholeheartedly like Groot…and awkwardly as Star Lord in Endgame.

I also listen to the little known Awesome Mix Vol. 0, which Gunn played to his actors while offscreen but onset in GotG 1 — just to keep everyone in the mood between takes.

Come and Get Your Love

There are 64 songs James Gunn considered including in his Guardians trilogy, which means this is a big spoiler for the eventual Guardians 3. But with the third film still a long time away (with Gunn fired, then rehired, and now the viral pandemic putting new movies on indefinite hiatus), then we can take this lovely gift in the spirit of friendship and joy.

Here’s the link to the 64 song Spotify playlist for Meredith Quill’s Complete Awesome Mix. You need Spotify to play each song entirely, or use the titles to make your own “mix tape”.

Thank you, James! Sometimes we can have nice things.