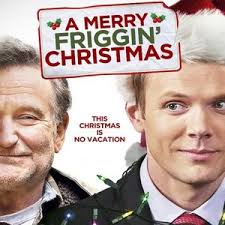 Not a funny movie, in spite of the title. Also, painful in retrospect regarding Robin Williams. RIP to a national treasure.

Merry Friggin’ Christmas was a strange, strange film to watch. It seemed to have the distinctive low production values of a Hallmark Holiday Special, yet somehow boasted the clout and cash flow to hire friggin’ Robin Williams as the co-star. (Not to mention Candice Bergen, in a throw-away role.) What happened? Why was this flick so  unforgivably boring and depressing?

Also, it was rather mean-spirited. Call it an anti-Hallmark Hallmark Movie.

Whatever’s the case, I expected a comedy, based on the commercials and the title. And while some scenes proffered the funny, it was mostly awkward cringe-humor, with a pervading stench of black comedy.  Did I laugh out loud? Maybe once.

I DVRed this on TV this Christmas, billed as a double feature with Bad Santa (also a darker comedy than expected). [pullquote]The difference between the two is while Bad Santa was also a dark comedy, it had good acting, a real dramatic story, and high production values.[/pullquote]

Friggin’ Christmas was boring, with limp humor, thinly drawn characters, and a depressing narrative lacking a worthy payoff. They could have had fun with the road trip trope, for example. (Driving a truck full of porta-potties had so many unrealized possibilities – were the writers completely checked-out?)

At the denouement, the kid gets a present he can’t even use. Why? Is that supposed to make the narrative’s lengthy shenanigans ironic? It certainly wasn’t satisfying.

I don’t have a lot to say in this review, except to note that the late Williams seemed stuck under a thick cloud of depression, which might have been an indication of how the actor felt by that time in real life. His character oozed self-loathing. Knowing what we do about his death, it was painful to watch.

[pullquote position=”right”]Looking up Robin Williams’s bio, I realized (and kind of guessed) he killed himself in 2014, the same year Merry Friggin’ Christmas came out. Ouch. 🙁 [/pullquote]

(Want to celebrate his Robin Williams’ life? Don’t see this. Rewatch The Birdcage instead, where he clearly had fun with his role.)

Rotten Tomatoes gave Friggin’ Christmas an aggregate rating of 16%, so it’s clearly not just  me turned off by the film. The best moments belonged to the amusing police officer, the cheery guy who pulled them over several times. I bet that character had a nice Christmas. (Remember, there are no small parts, only small actors.)

I can’t say more about this lackluster offering. I wish I could rate it higher, if indeed it’s Robin Williams’ swan song.