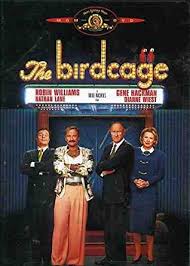 I’m still giggling. Some of this movie is just not cool today, but the basic madcap humor and earnest message is a win.

When The Birdcage opened as a feature film in 1997, I don’t remember people being quite so terrified of gay men…so it surprised me, 21 years later, to see such fear in the hearts of the young straight couple to admit the groom-to-be had two fathers. Or, as this movie made clear, one male father, and one male mother.

I’m guessing the producers chose to make the young lady’s parents so super conservative to even be close to being okay with this premise — even to making Callista Flockhart’s character’s father an uber republican senator, basing his platform almost entirely on a Moral “Something-Or-Other” Coalition.

I can’t imagine this movie being produced today. The son made his doting, supportive parents pretend to be something society deemed acceptable, deceive his fiance’s parents, bring on a “fake” (sort of–it’s complicated) cis female mother, and REDECORATE THEIR ENTIRE HOUSE to appear heteronormative. It felt so completely unfair and inappropriate that I had to sit back, reminding myself the original version of the story came out even earlier, in a time when “the gays” was a legitimate source of humor. (Gene Hackman’s senator is an equal-opportunity xenophobe: he also says “a Black.”)

Not too shabby. I’d love to see it on stage, myself.

Anyway. [pullquote]I’ve decided not to judge an old story on new norms. [/pullquote]So be it: in this film’s universe, it’s a screaming hoot to present a wildly feminine fellow as a manly men’s man. Yes, I’m being sardonic, but if we go with the old and acceptable trope of mixed identities and madcap humor, this really is a super fun film. It made me a little sad to see Robin Williams here, knowing now how his genius stemmed from intense depression, but he was note-perfect as the long-suffering father who stands by his man when it counted. Nathan Lane, as William’s effeminate mate, was at turns amusing and heart-breaking, but always fantastic. And [pullquote position=”right”]Hank Azaria (as their houseboy) was a non-stop delight, and not because he was gay, but from being such a wonderful weirdo in all incarnations. [/pullquote](I want an entire movie based on the life and times of Agador Spartacus. ) 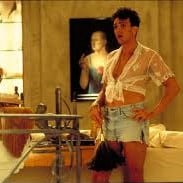 Everyone committed to their parts with genuine glee and abandon. It was a real pleasure and treat to rewatch this film, so many years later, in spite of the genuine frustration of intransigent attitudes that hopefully don’t persist today.

[pullquote]I give this a super high grade only because the film made me laugh harder than I have in many (many!) years[/pullquote], from seeing everyone scrambling to hide phallic statues and bowls with Greek boys playing “leapfrog” around the rim, serving shrimp soup with no shrimp (and uncracked eggs floating around) as the only dish, and the joyous end with Hackman’s senator finally accepting the inevitable and the ridiculous. I’m still  smiling two days later.

I don’t want to write any more for this review, for two reasons: it’s immensely funny and shouldn’t be spoiled, and because I’m kind of uncomfortable making a lot of comments on using Gay Panic as a source of humor. If you have any suggestions how to handle both loving and being disturbed by the themes of a  movie, please leave them in the comments below.

Movie Grade: A+ (For being legitimately enjoyable when taken on its intended merits: showcasing great acting, playful humor, and showing that society should never make one feel ashamed of themselves. )