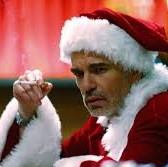 Don’t sit on my lap. I don’t care what you want for Christmas. Dirty little f#@kers.

Billy Bob Thornton can act. He’s underrated, but shows a consistent range throughout his filmography. During the holiday season, he’s even got two popular rewatchable Christmas songs under his belt. He’s completely believable, whether he’s a smary President of the United States,  or the world’s meanest, drunkest Santa.

And here’s where Bad Santa begins. I have a surprising amount of holes in my “personal” movie database, and this is another film I never had a chance to see. Now upon watching it, I’d say he really is the worst Santa imaginable, and I thought Dan Akroyd’s dirty/hungry Santa in Trading Places would get this award.


[pullquote]Thornton’s Santa is more like a Grinch or a Scrooge than anything else, except that this character is worse. [/pullquote]He’s a dirty, mean drunk who snarls at children and pisses himself. He leers at and and grabs women (wait — he ALSO did this as the US President in Love, Actually). He has one useful skill — cracking safes — and uses the money to drink on the beach until the next Christmas season, where he can start it up again.

I expected this film to be pure low-brow comedy.[pullquote position=”right”] It wasn’t until the second act that I realized this is a drama — a drama with comedic points — with a real storyline in there, and a lot of pathos. [/pullquote]Thornton suffuses his character with strong whiffs of desperation, alienation, and the complete lack of a moral compass.

In a word, this Santa is a vile man. It takes an awful lot to stir him towards anything remotely resembling compassion. By the time he’s gassing himself in the garage, we pity this human husk. I waited for him to become a better person, but when I saw him in the car, I thought his story was done — it would be a reasonable ending; we’d all walk out sad, but it made sense.

Turns out some kind of Christmas Angel was smiling upon him in Arizona. He meets a couple of people who like him for no real reason. He’s rude to them — super rude, in fact — but they come back for more, slowly breaking down his self-imposed barriers of isolation. What happens over the course of the film is nothing short of a Christmas Miracle (TM). He doesn’t end up a nice man by any means, but he’s found a reason to live, and to reach out to others, and discovers the remnants of his own humanity. He ends up exactly where he needs to be, ready for an ersatz family to care for.

In other news, I liked Bad Santa a whole lot, more than I thought I would. Never once did it get syrupy or tug on my heartstrings. But in spite of myself, I rooted for this guy in the end. If you don’t like the Hallmark Christmas subset of a genre, try watching this.