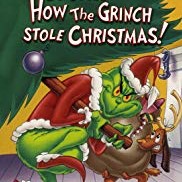 With the newest incarnation of The Grinch in theaters this year, we thought it was time to take a look at the history of this mean green creature, who is both dastardly and oddly sympathetic.

How The Grinch Stole Christmas  (1957) – The original kid’s book by Dr. Seuss is beloved, and for very good reasons. It started it all, showing us a grumpy Gus who hates the holiday (shades of A Christmas Carol). He steals, he lies, he abuses his dog Max, and breaks Cindy Lou Who’s trust…but eventually hears the joyous music and comes through in the end. This is an allegory for humanity, in a real way. [pullquote]We can be mean, we can hurt others to hide our own miserable loneliness…but if we open ourselves — just a crack — to others…well, we might learn to belong after all.[/pullquote] Who hasn’t known this kind of profound alienation? Who doesn’t secretly dream of being accepted despite the petty crimes we’ve committed? The message hits us right in the feels. Dr. Seuss knew it. This is among the three top stories he gifted to generations of children. (Along with The Lorax and The Cat in The Hat. Can’t argue with those.)

How The Grinch Stole Christmas –  A faithful and rousing rendition of the Dr. Seuss book, the animated 26-minute special from 1966 is definitely something…yes, special. Growing up with this, it was a traditional treat to rewatch it every year, as a child. I still watch it now to herald the holiday season. Good animation, great songs (I still sing the refrain), and a story to make your heart grow three sizes in the end. A-level work.


The Grinch (2000) – The live action version with Jim Carrey dropped on the scene to a mostly poor reception. (It seems Carrey doesn’t always have the magic touch.) I recently watched this for the first time, and found it lacking. Middling, dank, arbitrary, and a bit sour. Ron Howard himself directed, and usually produces great films. What happened to the color, the joy, the fun? Not everyone panned it, however. The Wikipedia reports, “Despite mixed reviews that often compared the film unfavorably to the 1966 special, it won the Academy Award for Best Makeup, and was also nominated for Best Art Directionand Best Costume Design.”

Dr. Seuss’ The Grinch (2018) – [pullquote position=”right”]Did we need ANOTHER Grinch? Why reboot this one; it’s been done enough, surely? [/pullquote]In spite of my fears, every time I saw the new animated trailer in theaters I smiled and giggled in spite of myself. It looks a world of better than the live action version. I think they might get it right! I’m not the kind of critic who wants to see the same darn themes rebooted every few years, but agree Pixar knows how to craft a film. The trailer looks charming and fun: I’m all over it. If it doesn’t suck, it might put this story to bed, finally. NOTE, after seeing the 2018 movie: it didn’t. Here’s my Grinch-like review.

Watch The Grinch Trailers, to get you in the proper mood for the Mean One this Christmas: