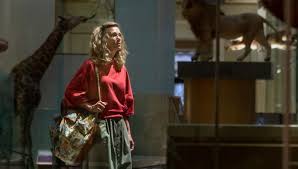 DC’s Wonder Woman 1984 film, scheduled to arrive November 19, 2019, posted a first look at Kristen Wigg’s villain “The Cheetah” today, and at this point we know very little about the role. The sequel/prequel plot will somehow be squashed between the bulk of Amazon princess’ World War I origin entry last summer, and her final scene fast-forwarded to the present day with a Bruce Wayne reference (Wayne Industries).

This isn’t even including her featured cameos set in modern times during Batman V Superman (released March 25, 2016) and The Justice League (November 15, 2017).

We do know Chris Pine returns as Steve Trevor (another pretty Chris, playing another heroic Steve…yeah, we know), and we have to guess: is he also as immortal as Diana Prince seems to be? Prince is from a race of Amazons, so maybe I can buy that. But I don’t think immortality is contagious. Also…we saw Trevor die in Wonder Woman, right?  And not in a preserving block of ice, like the MCU’s Steve Rogers, so…WTF?

[pullquote]DC is clearly trying to catch-up to the Marvel Cinematic Universe, but breaking their timeline can’t help. The MCU has seen heroes return, but they’ve earned their way, keeping continuity almost completely intact over ten years — something of a major miracle.[/pullquote]

In any case, we’ll be going both back and forth to the future in Wonder Woman 1984. To confuse things further, this is set shortly after Lynda Carter gave us her campy/cool (but also iconic) Wonder Woman TV series from 1975 to 1979.

How all of this will shake out better make sense, if the DCEU wants to keep the slight momentum they garnered with Gal Godot’s breakout Wonder Woman appearances in Batman V Superman, Wonder Woman, and The Justice League. Color us confused and tentatively hopeful.

Anyway, here’s the first photo of Kristen Wiig/The Cheetah in Wonder Woman 1984, as her human role…possibly looking at a stuffed cheetah in a museum?