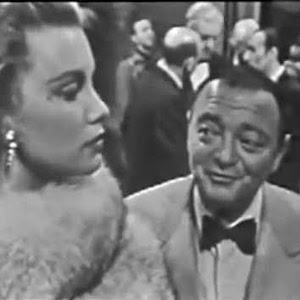 During the course of doing my bit of the Giant James Bond Rewatch, there were references to Climax! Casino Royale which is the very first screen outing for Bond; an episode of Climax! from 1954, less than three years after the novel was written. Seeing as how it was a television episode from the other side of the planet and broadcast before I was born, I doubted very much whether or not I’d ever actually get to see it.

So you can imagine my surprise when the good people at Apple included it in the film & TV part of the iTunes Store! Obviously, I snapped up a copy and gave it a watch. After all, it turns out that, at just fifty minutes long, it’s the shortest James Bond outing — which ties in quite nicely with No Time To Die being the longest!


Admittedly, it was released as an episode of the 1954-1958 Climax! anthology series, rather than an actual feature film but, for the sake of completeness, I’m including it in the roundup…there will be spoilers!

Needless to say, there’s a world of difference between this version and both of the cinematic versions. I mean, unless you run the film through at 48 f.p.s. there’s no way that you can get two hours’ worth of action into fifty minutes of screen time. Unless you’re a big fan of the Keystone Cops.

So what do you get and what do you lose? In short, the majority of Climax! Casino Royale is taken up with the action that takes place within the casino itself. Mainly the game between Bond and Le Chiffre but there are a couple of other scenes that you’d recognise.

At Her First Scream, He’s Dead

Before I go much further let’s have a quick look at who’s who. James “Card Sense Jimmy” Bond is played by Barry Nelson. Nelson was, pretty much, ubiquitous for the latter half of the last century; Murder, She Wrote, Fantasy Island, Magnum, P.I., Dallas, Taxi, and many, many more featured Barry Nelson in at least one episode. He was even in The Shining for goodness sake!

Le Chiffre is played by the legend that is Peter Lorre; my childhood is peppered with memories of Peter Lorre in no end of films. Michael Pate is Leiter; I have to own up to not recognising this Australian actor, but he has racked up over a hundred and seventy screen credits. Similarly unfamiliar to me was Linda Christian as Valerie Mathis.

The cast is filled out with a number of, essentially, background and cameo characters.  To be honest, the supporting cast are not served well by the closing credits. Unlike nowadays, the credits last for about a minute, and a lot of the cast are just missed off altogether; Le Chiffre is supported by three henchmen but only two get listed…who was playing Zuroff? That, seriously, is an unanswered question! Basil (Gene Roth) and Zoltan (Kurt Katch) get named but not poor old Zuroff.

Another credit SNAFU is that Leiter is listed as Letter. Oh dear, what a pity, never mind.

There are some very obvious differences. For instance, Climax! (or Climax Mystery Theatre as it later became known) was an American enterprise which meant that the hero, Bond, no longer works for MI6 — but is American and works for the CIA.

Felix Leiter has swapped sides the other way and changed his name to Clarence Leiter because Clarence is, apparently, quintessentially English. When they first meet, they go through some elaborate introduction involving broken match sticks — which has doubtless been killed off by the rise in smoking cessation. Vesper Lynd and René Mathis are both missing but represented by Valerie Mathis, who is both Bond’s love interest and working for the French Secret Service.

Bond gets tortured by Le Chiffre in an attempt to recover the winnings. Rather than being beaten around the testicles, he has a toenail/pliers interaction which allows some below the waistline nastiness while still rendering it eligible for US TV.

The game is baccarat as in the book and the 1967 film, but unlike the No Limits Texas Hold ‘Em in the 2006 version. Another difference is the drinking. There’s no martini…shaken, stirred, vodka, or anything. When Bond orders a drink it is, quite simply, a scotch and water. Leiter orders a scotch and soda which is a wee bit closer to being a cocktail! Oh…and there are no barrel walk/stylised introductions, or cars either!

Some things appear in Climax! Casino Royale, which would later go on to become staples in the later official films. Valerie Mathis is the de facto first Bond woman. A minor difference is that Bond and Mathis have had a relationship in the past, rather than her just being some random woman that Bond needs to, errm, pump for information. That doesn’t stop Bond from using his masculine wiles to manipulate Mathis and, by extension, Le Chiffre.

Another first is the first gadget! This takes the form of a cane with a gun built into it. Sadly, this is brought into play by one of Le Chiffre’s men, rather than the esteemed chaps in the Q Section.

Maybe it’s a bad guy thing, but a gun cane was used by Valentin Zukovsky (Robbie Coltrane) in The World Is Not Enough. I suppose it can be seen as an evolution of the sword cane — which has been used to thrill audiences since Hoppity Goes to Town in 1941.

And where would a Bond film be without a snappy quip? Climax! Casino Royale opens with Bond entering the casino when a hand holding a gun appears and fires at Bond. Obviously, he survives, and an apologetic casino manager says that as Bond was on his way into the casino, then it couldn’t have been his winnings they were after. “It wasn’t my autograph either,” quips Bond. Then, when Bond and Leiter meet up, they have the following exchange…

Leiter: Aren’t you the fellow who was shot?

Bond: No, I’m the fellow who was missed.