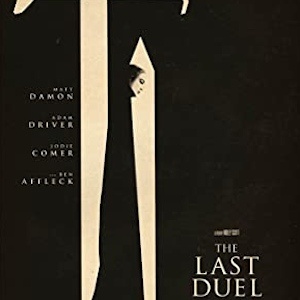 This is a hard movie to watch, but at the same time, it should be watched. That makes it difficult to give it a grade. If I grade it on the enjoyment I’d give it a very low score. But if I grade it with respect for the narrative, the message, and the skill of the storytelling, then I’d give it a high grade.

A grade of B+ lands somewhere in the middle ground. But if pressed, I’d say this movie couldn’t have been much better than it was. Whether it’s a movie, a sports team, company, or individual: meeting your potential is a rare accomplishment.

Plot (Spoilers)
King Charles VI declares that Knight Jean de Carrouges settle his dispute with his squire by challenging him to a duel.

We learn in the opening scene that the story is first viewed from the perspective of Sir Jean de Carrouges (Matt Damon). You can assume—correctly—that the story will be retold twice more from the other two main characters, in Rashomon fashion.

Right off the bat, I thought, “This is going to be long two-and-a-half hours,” because the acting was remarkably stiff, especially by Matt Damon. It’s only later that I realized that there’s a reason for that. The character Matt plays is very stiff. Since we are seeing the story from his perspective we see everyone behaving as if they’re reading their lines for the first time, unsure how to emote any of them, so there’s no emotion.

Only when we switch to the story from the perspective of Jacques Le Gris (Adam Driver) and Marguerite de Carrouges (Jodie Comer) do we see a full range of emotion from any character. That is a bold choice for the creators to make.

While Matt has to be given credit for acting badly on purpose, I think once again Jodie Comer steals the show with her amazing skills. There isn’t a better actress performing today. Maybe as good, but not better.

After the movie, I asked my wife if she thought this would be a good date movie. She thought for a second, “I think women should drag their dates to this movie to test them.” And that much is true. This movie is, I think very obviously, a reaction to the #MeToo movement. Setting the story in the fourteenth century puts a lot of distance between them and our current culture, but at the same time shows how little has changed. There are cultures on this planet right now that treat women no differently than how they were treated in this movie. In six hundred years we’ve managed only to recognize the disease and treat the symptoms. But the disease still festers in western culture and thrives in many other cultures.

Small differences are a big deal

There are some incredible subtleties in this movie as we rewatch different scenes from different perspectives. Keep a close eye on how the three main characters speak and act. The vocal tone used to deliver lines makes a big difference in the interpretation of the meaning. Sometimes characters say a line in the version from their perspective, then the other from their perspective, then an entirely different character in the last. It reminds us that our memories, especially when emotions are running high, are questionable, to say the least.

About The Peetimes:
We did our best to use scenes where the main characters have little interaction with each other.

It’s impossible to get four good Peetimes out of this long movie, but we did our best.

There are no extra scenes during, or after, the end credits of The Last Duel. (What we mean by Anything Extra.)

chevron_left The Giant James Bond Rewatch – Climax! Casino Royale (1954)
Is there anything extra during the end credits of The Last Duel? chevron_right