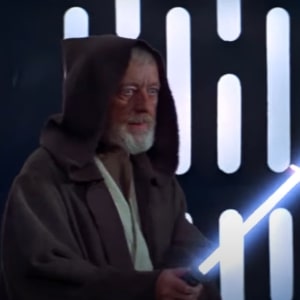 So many Star Wars movies. So many lightsaber and “lightsaber-adjacent” fight scenes over 42 years. Which saber duels are the best, the most visually stunning, or emotionally moving?

I don’t know much about sword technique (<—- we wrote about that here) beyond endlessly watching Lord of the Rings or Xena: Warrior Princess, but I know when a scene satisfies. Of course, this ranking is subjective. DUH. I’m also only including duels between actual people. No CGI fights. (Sorry am I, Yoda). 😉

Warning: spoilers ahead for the saga through Star Wars – Rise of Skywalker.


Counting down my top lightsaber fight scenes, with the videos to illustrate them…here we go!

It was slow;  it was sluggish, but it was our first lightsaber fight, and the emotional stakes were sky(walker) high. Looking back, it’s a wonderful galaxy-building scene, and when Luke sees Obi-Wan die, it packs a punch every time. Even after dozens of viewings.

(Even though the old Jedi Master doesn’t seem to become more powerful. I blame this on Sir Alec Guinness, who famously hated the role. That’s probably why we got Yoda in the first place.)

But this real life knight didn’t let us down — his expression when he sees Luke at the end of his Vader duel is subtle and fantastic. He gives a small smile to Vader before he puts up his sword. Iconic. Look for it. Well done, by a true acting legend.

RunPee Dan has a video explaining why this is actually one of the most realistic sword fighting styles shown in Star Wars, and here is the scene in question:

5. Young Obi-Wan vs Anakin Skywalker — (Revenge of the Sith)

I’m not a big fan of the prequels, but some scenes stand out. In Revenge of the Sith, I kept waiting for it to feel like Star Wars, instead of a documentary. I got that in the last half hour of Revenge of the Sith. And in my recent saga rewatch, I felt terrible for new quadruple amputee Anakin. Then he caught on fire and cried to his former ‘brother’ Obi-Wan. Ob-Wan is clearly full of torment, but almost casually picks up Anakin’s lightsaber and walks off. A real pal would have killed Anakin, instead of wandering away to let him burn to death. But then we would never have had Darth Vader, so….go with it.

The deciding fight on Mustafar is nicely done, if we can ignore the problems with the estranged Jedi duo fighting a foot away from LAVA. LAVA. I feel like I need to say this a third time: LAVA. Does being a Jedi give you heat resistance?

Oh well; the fight was still good. I think it gave us the emotional catharsis that we, the fans, needed, to buy fully into Akakin’s final fall from grace. As in killing Jedi Younglings and genociding the Sandwalker race isn’t enough!

For an up to date reference: Rey healed a serpent monster. Respect! And that worked into the rest of the narrative (including The Mandalorian, on Disney Plus). That made me happy and gave us important exposition without shoving our noses in it. Rey FTW.

Raise your hands if you think it’s any Dark Side coincidence that Darth Vader made his Mustafar Burad-Dur fortress on the planet he lost everything on. The Dark Side needs a constant source of pain and hatred fueled to keep fully aligned with the Sith need for anger/fear/resentment. Good way to keep hatred burning in your heart! I do get that: it gives unlimited Dark Side vested interest.

Yet…every time we see Vader in the Bacta Tank, or meditating in his oxygen cocoon, we can’t help but think he longs for his body/soul purity back. At this point I think he wants to escape the Emperor, but realizes he’s trapped by a mostly mechanical body and a well of bad deeds — he’s burned bridges from everyone who might have helped him purge the anger. It’s hard to redeem yourself after genocidal acts, even if” bringing order” to the galaxy seemed seductive at the time. No one thinks they are the Bad Guy in their story. I think Anakin did think he was helping the known worlds, and that the Jedi were the ones in the wrong with their non-attachment credo.

This video section is in 2 parts on You Tube:

This bit gives me chills every time. It’s only a few minutes, and only at the very end, but we get to see Vader in his Sith-y prime, effortlessly wiping the walls with rebel troops. It’s a desperate scene, tracking the Death Star data tape, but fits into the beginning of A New Hope with crackling style. Even though  I knew the rebels got the plans, I was on the edge of my seat, urging, “Hurry, hurry, OMG HURRY.” So wonderfully done. When the Tantive 5 speeds away I couldn’t help but cheer. If you watch this scene directly before A New Hope you’ll notice some continuity problems, but that doesn’t diminish the power of this…raw slaughter. This is why we love to fear Vader:

By the Maker, this was an excellent duel: even better on repeat when you know Luke is just a Force projection. In my theater viewing, I noticed Luke’s feet didn’t stir up the salt or red iron soil beneath, unlike every other person or vehicle on Planet Crait. I chalked it up to bad continuity at the time, but then cheered like a fool when I realized this was no mistake. Mark Hamill sells the deception for all it’s worth, and when he dusts an imaginary speck off his shoulder I had to give him props for the ultimate in cool. Way. To. Go.

And the top 2 lightsaber fights…

2. Rey and Kylo vs Snoke and the Imperial Guard — (The Last Jedi)

For one thing, it was neat to see different laser weapons than sabers (the Guards’ weapons), and two…the rewatchability level of this battle royale is outstanding. The choreography was unprecedented — seeing two Force users playing off each other’s skills to fight together, like Hercules and Iolaus in The Legendary Journeys. It also lit a lot of shipper’s torches for the star-crossed couple of Rey and Kylo Ren. This was simply an outstanding scene. Great chemistry and a few really creative moves.

It lacked a distinctive theme soundtrack, and that brings it down a little.  It just isn’t the number one lightsaber fight, and that might contribute. Listen to this as it plays: it’s an “action wallpaper” of sound. But…it’s still emotionally satisfying, and impressively choreographed to show two people totally in sync.

1. The Duel of the Fates — (The Phantom Menace)

Say what you will about The Phantom Menace, but this prequel has the single best lightsaber battle in the live action Star Wars stories. John William’s soaring, ominous, chant-filled score is among the best tracks in any Star Wars movie, and Darth Maul is legit skilled and scary. When we see Qui-Gon quietly meditating on the floor, while Maul paces like a caged tiger who can’t wait to kill, it’s a perfect wordless exposition on the Dark and Light sides of the Force. And when the red laser walls kept Obi-Wan out of the fight while he watches Maul kills Qui-Gon…MAN. This was a stunning 5-minute scene that never drags.

I was surprised Obi-Wan bested Maul, despite knowing he lives through A New Hope. And losing Qui-Gon Jinn really hurt. He’s my favorite Jedi, and I was thrilled to hear his voice in Rise of Skywalker. (I held out hope til the end that Qui-Gon got together with Shmi Skywalker, so Rey could be a grandchild of the Skywalkers. Or a Kenobi: my favorite theory. But wishing does not make it so. At least we found out the truth in the end, and it didn’t fully suck.)

Just watch this again without Jar-Jar-Colored blinders and you’ll see this is inevitably the best Lightsaber duel on any level:

Finn’s desperate “traitor” stand against Kylo Ren in The Force Awakens was an emotional and successful moment — but missed out on the BEST OF scenes because it wasn’t that great a fight, overall. Finn was wildly overmatched, and that he stood as long as he did was a tribute to the character’s determination and concern for Rey. He also might have a touch of Force Sensitivity (See Rise of Skywalker). But a great lightsaber scene? Not as such.

I didn’t include either of Luke’s lightsaber fights with Darth Vader for a few reasons that took a lot of time to consider. For one thing, Vader in Empire and RotJ was clearly toying with Luke. Vader basically Force-tossed the scenery at his son, instead of actually dueling. He wanted to make a point and then turn him to the Dark Side, not kill him. Mostly. “All too easy.” Until the whole ‘Sister’ thing came up in RotJ, when Luke started wailing on his father in rage.

The people Luke loves are his sore spot, and probably why he went into exile eventually. When Luke got angry enough in RotJ, his fighting style changed to swing, hack, swing, hack…and it’s clear he was using the Dark Side when he battered his father and cut his arm back off. (With the Emperor cackling like a damn fool from the sidelines.)  It’s a very emotional moment, but the lightsaber action isn’t that exciting. If this article was about meaningful fight scenes, this would be ranked highly. But as for a lightsaber showdown, it doesn’t perform.

Which top duel and/or lightsaber fight scenes did I miss? Yoda vs Count Dooku? Anakin and Dooku? Obi-Wan and General Grievous? Yoda and Palpatine? The big Order 66 showdown? Does anything from Rise of Skywalker make the grade? Tell me your thoughts in the comment section below.