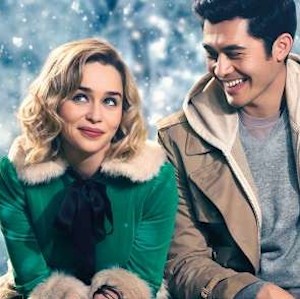 A lot of films take their titles from pop songs. They tend to then follow one of three paths.

1, There is nothing to do with the song in the film other than, perhaps, a play of the song part way through, e.g. American Pie, Whiplash, Stand By Me.


2, The song is a pointer to a biopic about the artist best associated with that song, e.g. Rocketman, Bohemian Rhapsody, I Am Woman.

3, The film is based around the music of an artist and the title just fits in with the tenor of the film, e.g. Mamma Mia!, Yesterday, Last Christmas.

I’d say “guess which one ‘Last Christmas’ falls into” but I think I gave the game away in the last sentence. Usually the last two categories are worth a look if you’re a fan of the music or musician, provided the songs are treated respectfully. For instance, Taron Egerton made a pretty good fist of Elton John’s songs in Rocketman, Chelsea Cullen was excellent singing Hellen Reddy’s songs in I Am Woman, and Himesh Patel performed the Beatles songs surprisingly well in Yesterday, but that could just be my jealousy of anyone being able to sing well who isn’t actually a singer.

So, what’s it about? Well, the main character is Kate (Emilia Clarke) who is a wastrel, a relationship train wreck, and a George Michael fan. She bounces around from one friend’s couch to another via one night stands, and — when totally desperate — staying with her parents (Emma Thompson and Boris Isakovic). Her parents are concerned not only due to her dissolute lifestyle, but also because she is unwell with an unspecified illness. Into her life comes Tom (Henry Golding), who seems to be a sensible yet fun loving guy, who encourages her — and she starts to sort herself out.

And that’s about as far as I can go and remain spoiler free. However, I’ve read articles which say that some people had seen the trailers and managed to work out/guess what the denouement of the film is months before it opened. Somehow I’d missed them all and managed to see Last Christmas from scratch in the cinema. I did work out what happens before the end, but all I’ll say is that there is a big clue in the lyrics of the title song.

So what’s it like? Well, I enjoyed it, obviously else I wouldn’t have chosen it for a re-watch. I remember when I went to see it, it was shown as a parent & baby screening, so I took my daughter and grandson along. Now whether it was chosen for this screening because it was assumed that it’d be a mainly girly audience I don’t know; other films in this time slot have included The Aeronauts, Little Women, Gemini Man, and Knives Out, so you can make your own mind up.

Anyway, we both enjoyed it; Amanda because it was a nice rom-com and the baby slept through it, and I enjoyed it for having the nice, warm fuzzy feelings you want in the run up to Christmas. I did spot Andrew Ridgeley and got quite excited but, as Amanda wasn’t born when Wham broke up, that meant nothing to her.

But I’ll be honest and say that I was never a Wham fan, so wasn’t sure how it would have been received by someone who was

Fortunately, I have a good friend and former colleague who is a great fan of Wham and George Michael, so I asked her.  Sara Jayne said, “I was expecting it to be more like Yesterday, which I thought was fab. I hadn’t read what it was about, just headed to see it like the Whamette I am. I guess I thought a love story made over a mutual love of George or cemented by George music… just expected lots of George Michael/Wham, and to be able to sing along, but whenever it was played it was cut short.”

It seems to me that what you take from Last Christmas depends on what you go into it expecting; if you’re a fan of the music and want to hear lots of that then you may well be disappointed, but if you want a nice, easy seasonal bit of nonsense then you should walk out happy.