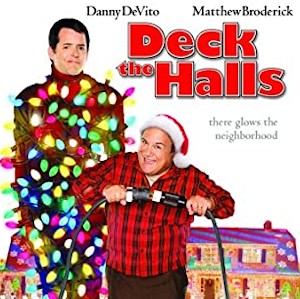 Deck The Halls joins the pantheon of films that I seem to be the only person who likes them: Cats, Gemini Man, Ghostbusters (2016), Godzilla (1998), Alien Resurrection, Planet Of The Apes (2001), Star Wars I: The Phantom Menace… I enjoyed them all! OK… Phantom Menace was a bit of a disappointment.

But Deck The Halls is almost universally loathed, including by the cast. Matthew Broderick used to wander around the set, shaking his head and saying “I’ve hit rock bottom.” Danny DeVito flew in, did his scenes, and flew out again. Kristin Chenoweth was getting over her romantic problems. All in all, not a happy group of people.


Then there are the critics…  “belongs in the holiday hall of shame”, “so contrived and utterly stupid in every way”, “like a fatally snarled string of Christmas lights”. The “5/10” on IMDb is positively generous compared to the ”28%” on Metacritic or the “6%” on the Rotten Tomatoes. There are tropes a plenty, obvious story lines are set up and delivered sans twist, and there are absolutely no surprises.

I Want My House To Be Seen From Space

So what’s it about? We’re in another typically huge American small town during the run up to Christmas. The local optician is Steve Finch (Matthew Broderick) is the “Christmas Guy,” in that he usually leads the way in the Yuletide festivities.

Along comes a new family in the house across the street, headed by Buddy Hall (Danny DeVito). Buddy is a natural salesman who gets easily bored, and ends up moving his family around the country seeking new challenges when he finds the thing that will give him a purpose; he wants to decorate his house so much that it can be seen from space. The townsfolk start to turn from Steve to Buddy for seasonal advice making him the de facto “Christmas Guy”.

Jealousy of the new guy, and the disturbances caused by the crowds and the light show, lead to a falling out and a series of spats and tiffs which Steve keeps losing — until the whole situation explodes in both their faces. Both wives, Kelly Finch (Kristin Davis) and Tia Hall (Kristin Chenoweth) leave the men on Christmas Eve, taking the kids with them. The  guys both backpedal frantically to try and resolve their situations, and the dénouement is when they all have to come together to achieve Buddy’s ambition and end up as friends.

The whole premise of the film is Buddy’s struggle to be seen from space. The assumption is that there needs to be more lights crammed into the relatively small footprint of a suburban home. Anybody who’s seen any satellite images taken at night can see that there are loads of tiny specks visible across Africa and the oceans, when they can’t be anything bigger than a campfire or a boat. It’s the detail and resolution of the camera that counts rather than the number of the lights on the ground. But, as they say, if you make an assumption you make an ass out of you and umption.

Oh… do you really call opticians “Doctor” in the States? Over here they’re even lower down the food chain than dentists when it comes to that particular title.

Matthew Broderick and Danny DeVito are their usual good value, even if it seems they were phoning it in

The various supporting cameos are spot on; Kat Penn as the Uber Geek in the satellite room reminded me of big chunks of my life, being happily grateful for something as simple as a packet of biscuits, despite working on Christmas Day.  Incidentally, the light show might look like and be presented as a power guzzling affair but the whole thing was LED based and used the same electricity as a couple or three hair dryers. All the little set pieces hit the mark… especially the runaway sleigh and the recovery therefrom!

You can see all the jokes being set up and getting delivered and while they aren’t, by any standards, pant-wittingly funny, they still manage to make me smile. The seasonal messages are all there waiting to be ticked off. To be honest, I do have a vague inkling as to why Deck The Halls doesn’t get much love but, as I said before, I just like it.