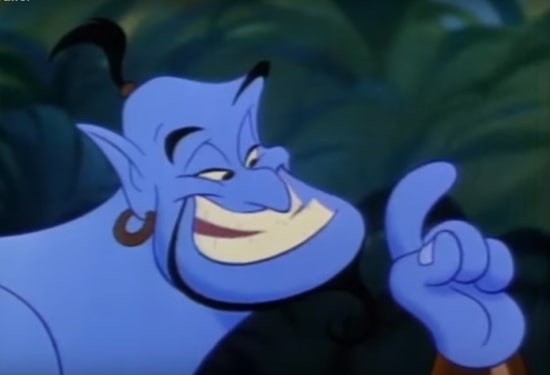 Robin William’s Genie, mugging for the camera in the animated Aladdin.

The animated Aladdin of 1992 is a beloved Disney classic. It’s one of the great films of the Disney Renaissance Era, and features A Whole New World, a TOP EVER song of ever in the the Disney oeuvre. Yet parts of Aladdin are deeply problematic to modern audiences. Disney is going out on a limb here, and I’m not sure this was the best live action remake to do right now (which I also found at issue with the live action Dumbo choice).

First, The Genie is a Slave

It may be the overt racism isn’t as acceptable/noticeable now as it was in ’92. But let’s be real: the tale of Aladdin isn’t a modern one. Aladdin was recorded in the 18th century and had a prior rich oral tradition previously, stretching back to ancient times. Yes, the Genie was always a slave — the plot demands this — so I don’t know how they can even make this story work in 2019 without that uncomfortable element. The repeated prattle about finding the ‘diamond in the rough’ is all about Aladdin freeing the Genie. Aladdin doesn’t do anything else more worthy than any compassionate street rat would. No slave, no story.

Even the wonderfully crafted X-Files Je Souhaite doesn’t bother to avoid the sticky slavery aspect: at least here the jinn in question doesn’t wear actual chains. (And Mulder is a better, smarter Aladdin than anyone else ever, full stop. I won’t spoil his very intellectual, lawyerly three wishes.)

In 2019, depicting the Genie as a black/blue slave is…not exactly copacetic. It doesn’t matter that he’s freed at the end. He’s got metal wrist bands, and is trapped in a small vial for centuries. He has to please whoever rubs the lamp (oh, and ewww).

(BTW: that thing really doesn’t seem remotely lamplike…how is that tea kettle supposed to make light? Am I missing something?)
And you’re going to have to explain a few things to kids about slavery and Arabian culture/history. (For example — cutting a hand off for stealing bread or an apple was an accepted thing, you know.)
Let’s move on from the racism and ignorant Islamic-adjacent stereotypes for this review, shall we?

What else is an issue for the live action version? For one, no one really wants to see anyone else replace the late, manic, fantasmic Williams as the iconic blue Genie.

Non-slave aspects…there’s the equally unpleasant reminder that Williams killed himself years after Aladdin came out. I think most people appreciate the manic aspect of The Genie as part of William’s brilliance/illness, but neglect to recall his intense depression. It eventually killed him. On the one hand we want to preserve Aladdin as one of William’s career peaks (granted, there are many, but not so much in the Disney-verse).

On the other hand, it’s uncomfortable to be reminded of how society failed this brilliant performer. If an A Lister in Hollywood can’t find help, what does that bode for the average bi-polar/depressed individual?

This doesn’t even open the can of worms a Will Smith casting gives us for the Live Action Aladdin remake. He’s black, so there’s the slave awkward thing again. And then he has to approximate the humor of the original Genie. I hope HOPE HOPE they take this in a new direction, because no one can be Robin Williams. They shouldn’t try. I’ll find out soon — Will Smith is nominally a versatile and talented actor. So, I bet if there’s a problem with his portrayal, it’s in the script. I can’t speak to the casting until I see it, but this is a troubling role to take on, at best.

Jafar, Iago, and Other Notes on the Animated Aladdin

Let’s talk about the animated Aladdin film in positive terms. When it starts, it’s really cleverly 4th wall breaking: the “storyteller” (voiced Robin Williams at his smary best) frames the movie as a narrative. Amusingly, the ‘camera’ gets distracted and wanders away when the peddler person goes off-topic. I loved Deadpool framing his films…I didn’t know Disney did it before him. It’s a bit short, but very cute.

One neat thing is how Iago (Gilbert Gottfried) actually talks. We’ve seen animal sidekicks speak before, but this is a parrot. Parrots talk! The monkey and tiger, the other sidekicks in Aladdin, don’t talk. That’s clever, as parrots actually DO speak. I had enough parrots growing up to realize parrots are smart enough to make connections between what they say and what they feel. I was happy to see an animal sidekick that could possibly do Human-speak in a Disney film. (Yep, I’m easily pleased.)

Jafar, the villain, is an oily one. He could be cross-species ‘brothers’ with Scar (from the Lion King) or married to The Little Mermaid‘s Ursula (also cross-species, more or less). Note these characters all fall within the same Disney Era. It’s the formula that worked back then.  🙂

The magic carpet is really kind of awesome, and reminds me of Dr. Strange’s playfully loyal cloak.

But, really…there’s a lot of filmatic references to other classic movies here.  Moment from Raiders of the Lost Arc, from Titanic. That could be an entire article itself, so I’ll keep on keeping on.

Also worth noting — as this is a film from the Disney Renaissance period —  is how A Whole New World entices young people (or as in The Lion King, animals) to follow a path they never planned: to follow their dreams. This song works wonderfully here.

Who is the Disney Classic Aladdin MVP?

Um. Hey, wait…Aladdin is an orphan and a Chosen One? Ever see that anywhere before? (Answer — many many times before, with and without magic. And I bet the entire Internet we see it after Aladdin too.)

Back to to Robin Williams as the manic Genie. It’s a whole world of sad now, knowing Williams ended his own life via suicide. He made the Genie something special — something giddy and outstanding —  in his depictions of the wildly excitable magic-wish-giver.

I don’t know how the live-action version with Will Smith could even come close, since this was probably the closest Williams came to creating his own persona via film, and no one can truly compete. Honestly, I’m not sure how the animators followed William’s improv as well as they did. This version of the classic is worth watching just for seeing Williams on top of his game (even though he doesn’t appear until the half-way point in the film).

The past and future of Disney Live Action

Overall, Aladdin the film is still kind of cool, although it’s not as exciting as I remembered.  It’s no Little Mermaid, The Lion King, or Beauty & The Beast (the top representatives from the Disney Renaissance Era, which all hold up so nicely.)

What stands out is how this is a Disney Princess tale where the princess takes a back seat. It’s a male-focused movie, and that’s a welcome branch off the typical trope. Jasmine isn’t sidelined at all, but the POV is about the ‘prince’.

That’s unusual. Imagine Eric from The Little Mermaid being the main POV, or even the otherwise bland Prince Charming from Cinderella. I think that would be interesting for the next live-action versions.

However: one of the most important and enduring aspects of Aladdin remains the same as it has for centuries…if you could have three wishes granted, what would they be? And how would you word them to escape the inevitable sneaky clauses?

Easter Eggs in Aladdin and The Lion King