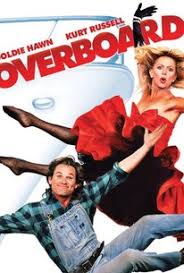 When I saw the original Overboard in 1987, I was delighted with its wit and charm. It had a lightness, a sense of playful adventure, and a sweetly romantic conclusion. It made me laugh. It made me happy. Although the plot was implausible — and vaguely sexist even for the 80s — I was willing to overlook that in favor of the likability factor. There was an adorable chemistry between real-life, then-couple Goldie Hawn and Kurt Russel.

The three children almost stole the show themselves. That can be a real trick. Kid roles can torpedo an otherwise good story by being too cutesy, whiny, or obnoxiously precocious.  [pullquote]Here, the director made sure everything worked. For a small and implausible movie like this, that’s kind of rare. Call it a minor cult classic. [/pullquote]


I still play Overboard whenever I need a little pick me up, placing it into a small category of flicks I can replay over and over as the years go by. It’s a great “background movie” too. So, light and inconsequential as it is, it’s a personal favorite. When I realized a new Overboard was in the works, I was nervous. Reboots do that to me. Understanding it’s a gender-flipped version helped a little. (It worked for Ghostbusters, which may not have been great, but was light on its feet and was worlds better than Ghostbusters 2.) [pullquote position=”right”]The new Overboard might not come close to bettering the original, but it could at least it might not suck. “Not Awful” has become an acceptable new category in this age of remakes, reboots, sequels, prequels, sagas, and long-term franchise building.[/pullquote]

The new actors for the new Overboard seem cute enough – although I’m curious why Kate Hudson (Hawn’s real-life and look-alike actress daughter) didn’t take up her mother’s role. We’ll see if the new guys have any chemistry, and if the story has enough grounding to stand up in today’s era.

In the meantime, what exactly did happen with the original cast?

Wikepedia’s 1987 Overboard entry lists the actors’ names, but apparently the kiddos didn’t go on to do much after this: only Jared Rushton, as Charlie Proffit (one of the twins), saw enough action to fill a filmography list.

Besides Hawk and Russel — who are STILL headlining major roles (as early as 2017’s Snatched and Guardians of the Galaxy Volume 2),  mainly the late, award-winning Roddy McDowall, and still-acting Edward Herrmann, Katherine Helmond, and popular character-actor Michael G. Hagerty continue to make a “splash” (pardon the pun). Here’s a You Tube video detailing where the original cast sailed off to (sorry again):