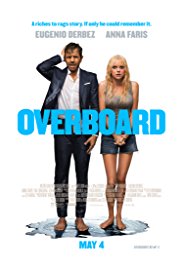 I’m not sure why anyone felt a need to remake *Overboard*. The 1987 original has a sparkling and famous cast, led by Goldie Hawn and Kurt Russel. It was sweet, it was funny, and despite the kind of casual sexism often shown in that era of movies, was a small cult classic. I loved it. I still love it and watch it when I need cheering up. [pullquote]But, remember, as major hits from the past go, this is still minor-league. It would be like remaking *So I Married An Axe Murderer*. Both are cute, fun little romps, perfectly made — but not exactly in the realm of important films of the 80s.[/pullquote]

I can see re-doing *Ghostbusters* , a major movie from that time, still on any complete must-see movie list. That remake was gender-flipped, and featured good natured cameos from almost everyone in the original. Which leads me back to *Overboard*.

Someone must have noted when the gender swapped *Ghostbusters* made enough of a splash to justify its existence, and thought the concept would work for other old properties. Cue *Overboard*.


Does it work? Yes and no. With the gender reversals and current climate of correctness, it’s a lot less sexist. It also features a large Latino cast to balance out all the blond girls. The good mom (Kate, by Anna Faris) finds love and  a father to her girls; the selfish alpha male (Leo, by Eugenio Derbez) learns to be warm, caring, and responsible…so the message is nice and the audience walks out happy. There are legitimate laughs along the way, mainly via Leo struggling to learn construction under the benevolent hazing of his co-workers. I smiled a lot. This should all be fresh and new for audiences not raised on the original.

[pullquote position=”right”]What doesn’t work is how underwhelming this version is. It’s not as charming as it hoped to be, and the cast doesn’t have that ringing chemistry of the first. The family moments feel rushed and unearned.[/pullquote] Kate’s “nurse” story lacks the cool cleverness of Kurt Russel’s “Wonders of the World Golf Course” scenario, and the children don’t have enough anything memorable to do. The side-plot with Leo’s rich family is simply dull. That’s way too bad; the antics of the crew on the “Immaculata” were wildly entertaining.

On all these levels, *Overboard 2018* doesn’t come close to adding anything interesting that a remake should. Only the character of Leo is consistently amusing, but with his role doubling for the formidable Ms. Hawn, the actor really doesn’t stand a chance in comparison.

If you’re a huge fan of the 1987 original, you might enjoy this reboot. It’s nowhere near as charming, but has its moments. There are many lines lifted exactly from the first, with expressions and tones carefully rendered the same way (ie: “Sometimes dads leave”). A lot of memorable shots are nicely echoed (as in the quiet, tension-crackling scene of the limousine driving toward Elk Cove ). It’s fun to find these elements honored and recreated.

One thing I would have enjoyed: there should have been cameos from the original cast scattered around, as they did with the aforementioned ghost busting movie. If they didn’t want to be that self-referential, they could have slipped in cameos to the extra scene during the credits. I was mystified by the cameo absence. Evoking exact phrases and scenes from the ’87 version showed that they weren’t hiding their roots. And it would have lent a respectful sense of fun for actors and viewers alike.

Enough about comparisons. I’ll grade this movie a B- on its own merits: it’s likable and fun enough for an easy afternoon at the theater. If you want to see something much more touching, that’s rollicking and straight out funny, with far superior acting, rewatch the original.