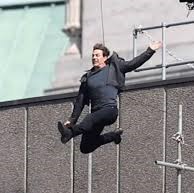 What is it about actors doing their own stunts, and especially actor alum from the Mission Impossible franchise?

Tom Cruise is known for doing some crazy maneuvers in his films. [pullquote]There’s a scene in Mission Impossible: Fallout where Cruise keeps on running with a broken ankle, so the cast could wrap up filming and go home.[/pullquote]

Jeremy Renner, who also stars in the Mission Impossible franchise as an unbreakable spy, followed through one of his scenes with TWO broken arms that had to be CGIed in, after filming his chair-surfing stunt in the hit comedy Tag. (We wrote that up here.)


Hats off to these actors. (Or maybe they need a thump on the head.) 🙂

This is the scene Cruise runs around with a broken ankle. You can see him limping as he pulls himself up and keeps on filming:

Cruise’s stunt was actually performed correctly…he was supposed to miss that wall. But he still landed wrong.  In the side take, you can see the weird and somewhat gruesome angle of his foot against the wall. Feet don’t normally look like that.

A more in-depth interview with Graham Norton on how Cruise broke his ankle in Mission Impossible: Fallout, while the audience cringes (it’s funny):

It’s nice to have a stunt person take on the option of broken and mangled body parts, but there’s a certain cachet to doing your own stuntwork. Cruise and Renner are like real-life superheroes! Renner, as Hawkeye, does play one in the Avengers films. Which makes me wonder – when will Cruise get his own role in a Marvel film?

Jeremy Renner Might Really Be Hawkeye: Films with Two Broken Arms in Tag