Movie Truism: Maybe going into a movie with low expectations makes it better. I didn’t bother to see DC’s highly anticipated 2016 Suicide Squad in the theaters because it was so lowly-regarded among critics and viewers alike. So I just let it slip by.

Cut to 2019. When I heard James Gunn  — beloved director of Marvel’s Guardians of the Galaxy — was taking over the creative reins of Suicide Squad 2 (as a ‘soft’ reboot), hope flared anew that finally DC would have a group film brilliant enough, funny enough, and just damn worthy enough to counter the amazing ensembles produced by the MCU.

A Whole Lot of Good

Honestly, I enjoyed the whole misfit group. There was a one-take moment where I grinned from ear to ear, as the misfit crew executes a dynamic Hero Shot. It’s an expected trope in superhero films, right? In Suicide Squad, it felt earned and triumphant…until the next second, where you realized, hey, this is a Villain Shot. An Anti-Hero Shot? An Anti-Villain Shot? The sheer amount of dissonance was delightful. 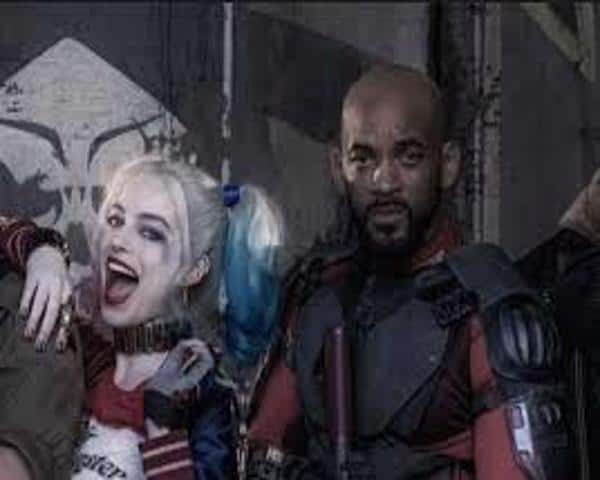 Deadshot putting up with Harley.

This is good story making. Really. Suicide Squad had a ton of viewer treats that broke from DC’s usual grim-is-good comic world. I too wanted to see “The Bat” put away: as Quinn says, “He ruins all the fun.” Batman shows up, but he’s relegated to the background. Superman’s only mentioned in passing. Good and good. This isn’t about them.

There are so many Easter Eggs in the background, with great signage, throwaway lines, and outright allusions to other characters inside the DC universe and out. [They even predicted 2019’s “Evil Superman” Brightburn! ] This is some lively shit.

Another treat: the appropriately brief cameo of Flash. (Ezra Miller can do a lot in a small role, and was a bright spot in the mostly dreary Justice League.)

As on Guardians of the Galaxy (which Suicide Squad was supposed to mirror) the extensive rock playlist is perfectly used. It’s great that movies list their songs during the credits, so I can remember to add them to my tune rotations. Suicide Squad leaned heavily into The Rolling Stones, which felt just right.

The second track — that instrumental background music we generally consider the “soundtrack” — was top-notch. In my notes, I scribbled several scenes where the music greatly underscored a character’s growth, emotional confusion, or was just plain…well…heroic. No other way to put it.

Another movie truism: bad guys can be heroes, and heroes can be bad guys. I think DC’s entire oeuvre is an ode to this concept.  (Exceptions: Wonder Woman and maybe Shazam.)

I’ll say this, though — the over-reliance on Queen tunes in genre films is starting to wear on me. When a scene perfectly uses a song in one film, said tune should be retired, like a great athlete’s number. So hearing Bohemian Rhapsody used by this crew was a nice moment, but as far as I’m concerned, BoRhap belongs to the wonderfully wacky Wayne’s World, forever. Can’t Stop Me Now was jarring in The Umbrella Academy, because why would anyone want to compete with the iconic zombie scene in the Winchester in Shaun of the Dead? (“Kill the Queen!”) And ripping Spirit in the Sky off the back of Guardians of the Galaxy went beyond homage.

Exposition and the Suicide Squad Characters

This is how you do it. With a large cast of super powered and/or crazy people to introduce, the best solution is to make the movie about THEM, not a MacGuffin plot. In a surprisingly smart move, that’s what Suicide Squad did. I loved the stylized flashback scenes of these criminals doing what they do best, their blink-fast list of skills, and how they each got taken down. These were very amusing scenes. Killer Crock especially was a hoot (Crock doesn’t seem actually evil, unlike most of the crew). His line about being beautiful was unexpected and well-played.

We also got some meaningful scenes with DeadShot in a text-book example of how to tell an emotional backstory in an efficient, effective way.

Speaking of DeadShot, he was a natural group leader, and Will Smith carried the movie effortlessly. Strangely, Smith apparently bugged on the James Gunn Suicide Squad 2 sequel. The news is Idris Alba is slated to recast Smith, which seems like a fair trade. Alba is the man, woefully underused as Heimdall in the MCU.

How About The Big Bad?

What really brought Suicide Squad down was the villain, and here I mean The Incubus. I’ll treat him separately from his sister, The Enchantress.

Actually, I don’t have time to discuss bad writing. The Incubus has zero development and isn’t worth delving into. He’s overpowered and boring. Next!

The Enchantress showed some promise in her CGI form, but when little June Moon started writhing around, it looked ridiculous. I appreciated the line that Mankind worships machines instead of gods now, but nothing was done with that intriguing concept. Fail. I don’t care. Bad villains are an ongoing superhero problem, but I mostly ignore that at this point.

An ensemble origin movie isn’t about who they fight, in any case. It’s about  group-building and world-building, which Suicide Squad got very right.

Now, let’s talk about the real controversial role: Jared Leto’s Joker. So many Jokers over the years. Some get it right. All are distinctive.

I’ve got my favorites (Hi Mark Hamill!), but Leto’s not one of them: I’ll just say I’m glad his role was little more than an extended cameo. Let’s keep it that way in the sequel. Quinn on her own is much more fun and I prefer her out of the Joker’s shadow. With the Suicide crew she’s a fascinatingly deranged soul, instead of being a pet to the Joker. (Seriously, he whistles for her like a dog.)

I’ll give this Joker one thing: he had one deeply interesting line. It resonated so strongly for me that I wrote it down to think about —

Something I hoped Suicide Squad would do is create real stakes and jeopardy…where not everyone you like is going to make it out alive. I had a feeling who that would be if they went there, and was satisfied with the payout when they did. It’s a brave gamble to take when you’re working with an ensemble you’re hoping to grow.

However, I didn’t buy their warm family feelings after sharing life stories over a few drinks, but I’ll give them this — bonds can form fast in life-threatening situations. And they had so much in common on a fundamental level: severely misguided people, good at being bad, damaged moral compasses, isolated, frequently abused, seen as the dregs of humanity, then abandoned in a dark hole with no hope of atonement.

Still, I’ll forgive some storytelling shortcuts in a movie this amusing.  With Gunn in the saddle, I’ve high hopes for Suicide Squad 2.

Color me pleased. I’m happy to add a third movie to the DCEU that I actually enjoyed, along with Wonder Woman and Shazam.

(BTW, stay through to the end credit scenes. Justice League was no Avengers, but it was thrilling to see JL’s inception anyway.)