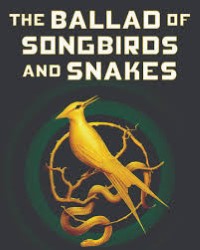 The new movie title is The Ballad of Songbirds and Snakes, and it’s a prequel. Author Suzanne Collins is writing the novel right now, which should be published by May 19th. Of course the movie rights are already picked up by Lionsgate, according to Variety. Is this any surprise?

Francis Lawrence — who filmed most of the Hunger Games franchise films — returns to the director’s chair.


The Ballad of Songbirds and Snakes is set during the time of pre-president Coriolanus Snow’s rise to power. Such an interesting theme for our times! Snow is 18 years old and prepares to mentor the tributes of District 12. At this point — 64 years before the Hunger Games film begins — the Hunger Games tournaments have been in play for only a decade.

Right now we can only speculate about the cast (we don’t even know the characters). What young actors would make good tributes? Who would be able to step into Donald Sutherland’s shoes as a younger, but still ruthless, Snow?

I’ve a huge Hunger Games fan. Mainly of the books, which are a far cry better than the films, although I’ll grudgingly admit to loving the first two films. (Nothing good could really have been done with Mockingjay, which IMO was the wrong film to split into two parts).

So, as RunPee is a movie website, I’ll ignore the novels and cover the films. In essence, Hunger Games and Catching Fire are very fine movies, and not just because I dated a man who looked like Peta. Really, he did. I’d add a photo, but since I don’t think he’d like that (this is a guy without any social media presence…part of his charm), I’ll refrain.

With no release date in site for the Hunger Games prequel, and Hollywood on hold from the CoVid-19 pandemic (hey… Panem? Pandemic?), there’s lots of time for a full four movie Hunger Games rewatch. And re-read. And time to argue over who should be cast in what’s bound to be a popular blockbuster — whenever we’re allowed to sit in theaters again. The odds are ever in their favor.

I volunteer as tribute.

Rewatch Review – A Look Back at The Hunger Games Series