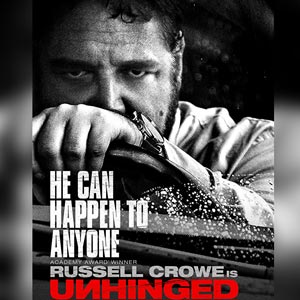 This is a hard movie to watch. With everything going on in the world right now… Well, let me just say that if you think your opinion of people could use a kick in the pants, then this movie will do just that.

But, that’s not to say the movie doesn’t have some (little) merit.

First, Russell Crowe is scary believable in this movie as a raging psychopath. After seeing this movie I sort of want to see some interviews with Crowe where he’s laughing and being normal, just so he won’t be in my nightmares tonight.


Speaking of which, that’s exactly what I just did. Here’s a nice interview to help you wash away the grit that Crowe’s performance will leave on you.

The good thing about this movie is that it doesn’t waste time. It’s short (80 minutes not counting credits) and to the point.

I admit this is subjective, but I believe the value in a movie like this is to give the viewer an opportunity to see themselves reflected, if only a tiny bit, in the characters. We never learn anything about Russell Crowe’s character; not even his name; he’s only referred to as the man. There’s no chance to develop any empathy for him, and without that the character comes off more as a force of nature — like a tornado indiscriminately wreaking havoc — than a human being.

The truly sad thing is that there are people out there like this. People who have been, as the man says, “Chewed up and spit out by the system.”

Our culture gives mental health only passing consideration. How many killing sprees could have been averted by someone taking a moment to give a hug and offer to help another with their issues? Most of us don’t cause the pain that others suffer through, but neither do we do much, if anything, to stop it.

The Plot and the Moral

The movie opens with the man killing a couple, presumably his ex-wife and new husband, and then burning down their house. If, on the other hand, the movie opened with a scene of an acquaintance of the man not taking the time to show a hint of concern for him as the last trigger before the man goes over the edge, then the audience could at least see themselves in that role…and wonder how many times we’ve been too wrapped up in our own drama to recognize the pain of others.

Instead the trigger in this movie is the character Rachel, honking her horn at the wrong person at the wrong time. We’ve seen that Rachel is wrapped up in her own life drama and doesn’t recognize someone else’s. She unwittingly agitates an already unstable person.

The movie ends with Rachel getting cut off and almost honking her horn at someone, but then thinking twice about it. That’s a simplistic moral of the story: don’t actively agitate people, because you never know if that’s what it takes to make them snap. On the other hand, if the story opened with someone not showing empathy, then the moral could have been: you can save a life, or perhaps many lives, by showing a modicum of compassion and understanding to those in need.

After recent events, I’m more aware of the role of white privilege in everyday life.

Throughout the movie I wanted to take the man aside and say, “Dude, look at yourself. You’ve worked your whole life in middle management. You supported the system that chewed you up in the end, but in the meantime you lived in comfort and security. But instead of appreciating the privilege and comfort you have, you let yourself turn into an angry, overweight, white guy. There’s ten million black men in this country who wish they only had your problems. So suck it up, get on a treadmill, and fix yourself, because you are your problem.”

I struggle between wanting to be compassionate to the white people who are suffering through drastic change, and anger at them for wasting their privilege and then bitching about it later, as if the world owed them more. Right now I feel like those people deserve what they get, because I’m a middle aged white man and I bust my ass to stay in shape, eat right, and learn more, so I can adapt to the changing landscape we live in.

Ultimately, I can’t recommend this movie because it has little redeeming value. The man isn’t some innocent victim of the system that anyone should relate to.

About The Peetimes: This is a short film, only 80 minutes long minus the credits. The 1st Peetime is okay, but has some story development. The 2nd Peetime is much better and is very easy to summarize. Note: Russell Crowe’s character is never given a name. I refer to him in the as either Crowe or ‘the man’ in the Peetimes.

There are no extra scenes during, or after, the end credits of Unhinged. (What we mean by Anything Extra.)

chevron_left Is there anything extra during the end credits of Unhinged?
Movie Review – Premature chevron_right