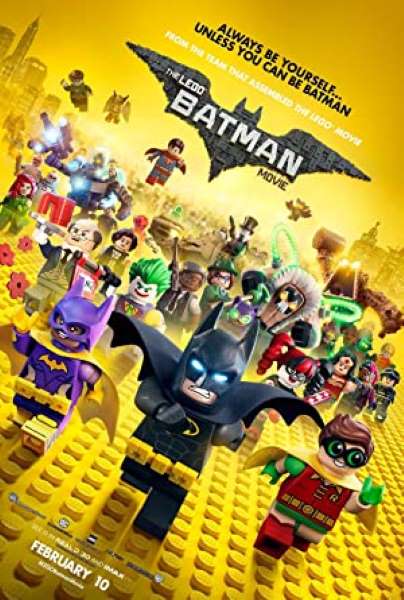 I liked this better than the original Lego Movie – this one is skewed a little more sophisticated for the grownups – but still has lots of color and spectacle for the kiddos. It’s a very charming film, with a surprisingly good storyline. Things move quickly, and there is a lot to see, making you want to go back and view it again – just to catch all the little jokes, asides, and throw-away lines. I loved the humor. Be aware this Lego flick focuses on Batman’s crew, and not the characters from the first Lego outing.

Cameos abound, and you will be amused at who is included: we briefly see the entire Justice League at a party, and then such famous baddies as Sauron, Voldemort, Jaws, the Gremlins, a Velociraptor, King Kong, Godzilla, the creature from the Black Lagoon, Agent Smith clones, Dracula, Medusa, Flying Monkeys and the Wicked Witch of the West…and even several Daleks from Dr. Who (EXTERMINATE!) make an appearance. I think Warner Brothers had a great time producing this sweet little film.

There are actually a few poignant, moving scenes, with a decent villain plot, and super cute background moments. I rate this as one of the top Batman movies in the entire Bat oeuvre.

About The Peetimes: There are two good Peetimes, but be aware this movie cruises along at a pretty good clip, with lots to see in every frame. Use the times I gave you.

There are extra scenes during, or after, the end credits of The LEGO Batman Movie. (What we mean by Anything Extra.)

1 thought on “Movie Review – The LEGO Batman Movie – One of the BEST Batman films, ever”