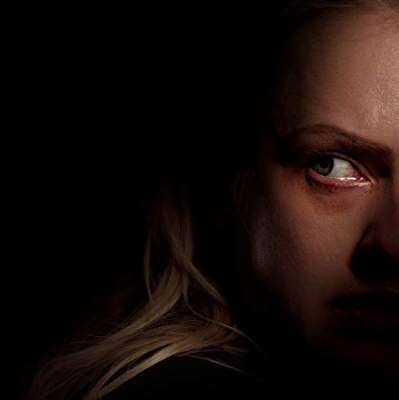 There’s no question that Elisabeth Moss gets an A+ for her performance in this movie. The movie may be titled The Invisible Man, but it was all about the Invisible Man’s wife — Cecilia.

Elisabeth Moss is in almost every single scene of the movie; plus, she’s the only actor in many of those scenes. I’d love to go back and watch the movie just to record the amount of time Moss is alone on the screen, acting in space with nothing else there.

If a less talented actress had be cast as Cecilia, those long isolated scenes would have begun to feel redundant, but they didn’t. Not once did I think, “Oh great, another scene of Cecilia alone in a room.”

But Moss didn’t carry this movie by herself. She had Leigh Whannell as both writer and director. Clearly, Leigh had a vision of what he was doing and executed it masterfully — almost, but more on that later.

Writer/Director Leigh Whannell did his homework. The Invisible Man has a Shining-esque feel to the pacing and tension.

If you’re not familiar with Leigh Whannell, he’s the writer behind the SAW and Insidious franchises. Clearly, he has mastered his craft with 20 scripts produced into movies. The Invisible Man is his 4th directorial job. I’m looking forward to seeing his future work, of which I’m sure there will be many, even though I’m not a fan of horror movies.

My one critique is that there are a few plot holes in the story. Actually, not the story so much as how events happen that wouldn’t really work in real life. It’s a minor point I’ll cover below that doesn’t detract from the enjoyment of the movie.

Below are a few points that will get into spoilers. Please don’t read any further until after you watch the movie.

As soon as James Lanier and his daughter Sydney were introduced I thought: they are good looking black characters; if either one of them gets killed I’m downgrading my rating. It’s so pathetically stereotypical to kill the good looking black guy, especially when he’s a police detective, or his innocent daughter.

Fortunately, Whannell didn’t go for the cheap and obvious. Instead, he surprisingly killed the sister. I thought she might get killed, but certainly not when it happened. That was really well done.

The plot hole that I have a problem with is that after Adrian’s brother Tom is unmasked, and Adrian is found tied up at the house, we’re lead to believe that Adrian gets off scott-free. But how exactly was the suicide faked? We saw pictures of Adrian’s body. At some point an official certificate of death has to be issued. How exactly did that work? And faking one’s death is a criminal offense. Adrian isn’t going to get out of this as easily as it was portrayed in the movie. Or, did I miss something? (It happens. I’m sometimes distracted taking notes for the Peetimes.)

Lastly, I’d like to mention that the best scene in the entire movie was the last. Cecilia’s gradual transition to a faint smile at the very end is all we needed to see to know that there is clearly going to be an Invisible Woman sometime soon. I can’t wait.

About The Peetimes: There are a lot of long slow scenes in this movie, but sometimes when nothing is happening, something is happening, you know what I mean? I highly recommend the 3rd Peetime. It’s near the middle of the movie and there’s no action or suspense in that one. The 1st Peetime is decent, but there’s building tension throughout and something important happens shortly after. Both the 2nd and 4th Peetimes are for emergencies only. I’m watching you and I’ll know if you use either one of them. Sorry, just trying to set the mood. 🙂

There are no extra scenes during, or after, the end credits of The Invisible Man. (What we mean by Anything Extra.)

Storyboarding for Horror – 7 Things to Remember